We all thought that Kate Middleton looked stunning on her wedding day when she married Prince William back in 2011, but apparently no one admired her more than Kim Kardashian, who apparently wants the Duchess of Cambridge’s dress for her own marriage to Kanye West. Probably because it’s pretty obvious her and fiancé Kanye West want to be royalty themselves. Well, you know what they say Kate, imitation is the sincerest form of flattery!

Kanye West and Kim Kardashian may think they’re Hollywood royalty, but clearly they want to be British royalty as it's claimed that Kim Kardashian is after Kate Middleton’s wedding dress!

The reality TV star has decided that for her third marriage, she wants a dress similar to the fantastic Alexander McQueen gown donned by Kate Middleton. Is anyone else unreasonably annoyed by this revelation? You’re not royalty Kimye! 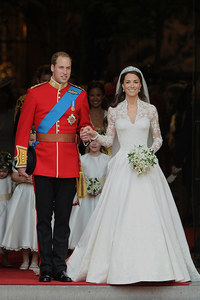 We’re hoping this doesn’t relate to the future West family’s apparent plans to move to London and enrol baby daughter North at a posh school.

​A source revealed back in November: “Kanye talks a lot about how he wants his kids to attend the same boarding schools that Kate Middleton and Prince William did. He wants them to go to Oxford, grow up alongside Royalty and to be part of the elite.”

“Kim loves Kate's style and while she is planning on several gowns for her big day, she wants the one for the ceremony to look something like Kate's dress.”

Hmm, it’s strange that she is such a fan of Kate’s dress sense – we’re fairly sure Catherine wouldn’t Instagram snaps of herself in a sultry white swimsuit…

Since the creative director of McQueen, Sarah Burton, was contracted to keep Kate’s dress a secret right until the big day, we’re guessing that Kim would be equally interested in keeping things secret until the big reveal – just so Keeping Up With The Kardashians can get the first look, if anything.

Do you think she’ll wear a tiara on her wedding day as well? Speaking of Kimye’s big day, from looking at the proposal we can make a sound guess that it’s going to be an overtly elaborate affair.

What do you think the pair will have planned? Tweet us @sofeminineUK