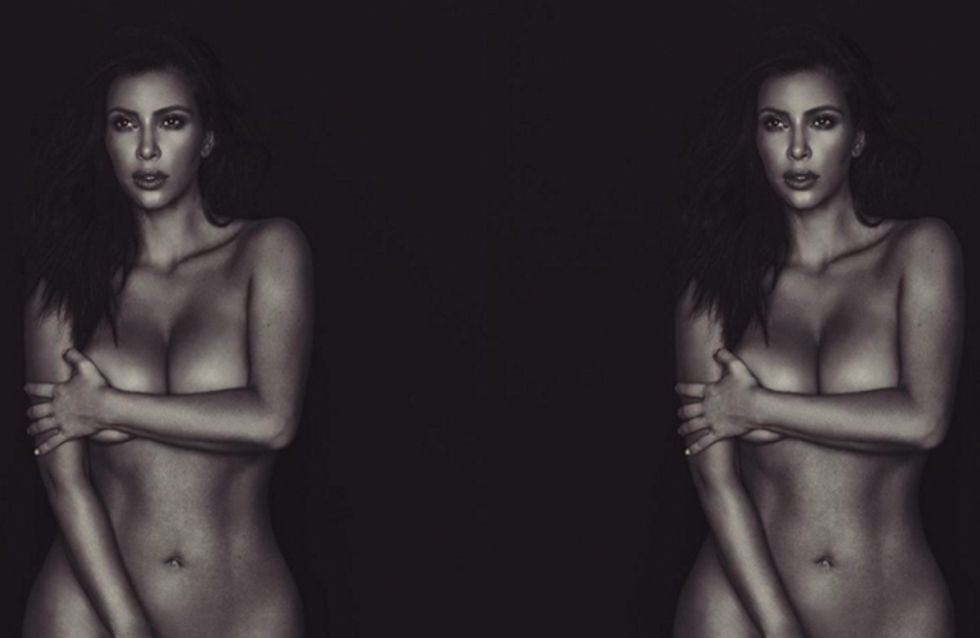 We'll admit it: earlier this week when Kim Kardashian got into a Twitter spat of sorts with Chloe Moretz and Bette Midler after they both commented on Kim's nearly naked snap, we had a good chuckle at Bette's comments and were pretty surprised by Kim's strong response. But now the reality show star has written an open letter about the reaction to her photo, we have to say we agree with everything Kim has to say...

After responding to criticism over her nude photo in a Twitter storm earlier this week, Kim took to her site to give an explanation longer than 140 character over why she chose to share the photo, and how fed up she was with body-shamers and slut-shamers.

When you're like I have nothing to wear LOL

“Hey, guys. I wanted to write a post elaborating on my tweets last night. In all seriousness, I never understand why people get so bothered by what other people choose to do with their lives.

I don’t do drugs, I hardly drink, I’ve never committed a crime—and yet I’m a bad role model for being proud of my body?

It always seems to come back around to my sex tape. Yes, a sex tape that was made 13 years ago. 13 YEARS AGO. Literally that lonnng ago. And people still want to talk about it?!?!

I lived through the embarrassment and fear, and decided to say who cares, do better, move on. I shouldn’t have to constantly be on the defense, listing off my accomplishments just to prove that I am more than something that happened 13 years ago.

Let’s move on, already. I have.

I am empowered by my husband, who is so accepting and supportive and who has given me a newfound confidence in myself. He allows me to be me and loves me unconditionally.

I feel so lucky to have grown up surrounded by strong, driven, independent women. The life lessons I’ve learned from my sisters, my mother and my grandmother, I will pass along to my daughter. I want her to be proud of who she is. I want her to be comfortable in her body. I don’t want her to grow up in a world where she is made to feel less-than for embracing everything it means to be a woman.

It’s 2016. The body-shaming and slut-shaming—it’s like, enough is enough. I will not live my life dictated by the issues you have with my sexuality. You be you and let me be me.

I am a mother. I am a wife, a sister, a daughter, an entrepreneur and I am allowed to be sexy.

Do you agree with what Kim has to say? Tweet us @sofeminineUK!