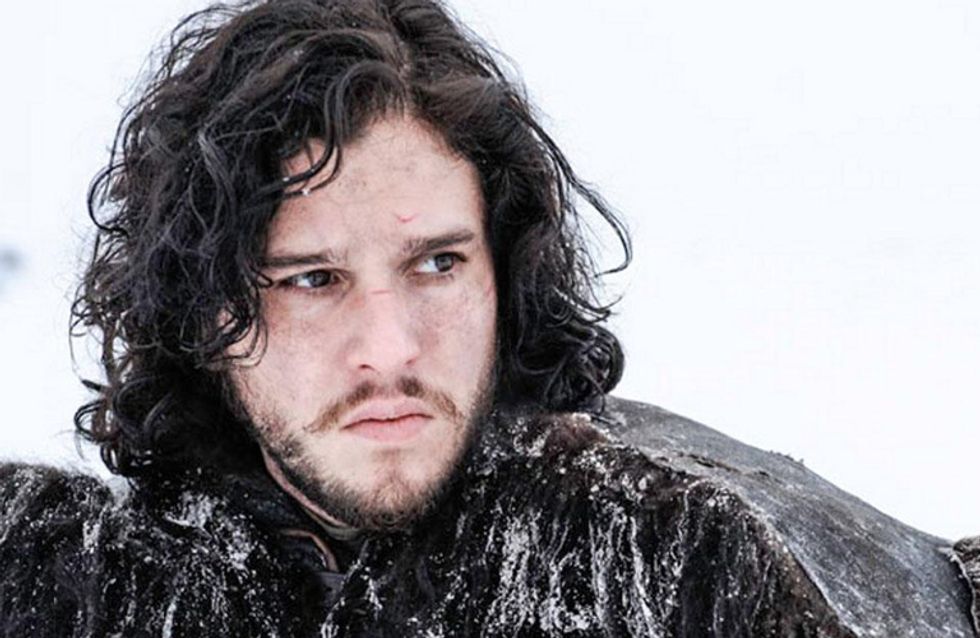 Oh Kit, everyone had been so careful! Everyone said Jon Snow was definitely, definitely 100% dead. Sure you'd been seen around Belfast with your hair in a cap, hanging out with cast mates and attending read throughs, but there was still that tiny, TINY hint of doubt that Jon Snow was dead for good following his stabbing. But not anymore!

A recent interview with Game of Thrones actor Kit Harington MAJORLY hints that he's not leaving the show any time soon, and he's not too happy about it either!

The actor, who plays Ned Stark's bastard (or is he? Nudge wink) in GoT had a brutal ending in season five as his brothers of the Night's Watch turned on him and treated him to a good old fashioned mutinous stabbing. The last scene shows Jon Snow dead on ground as his blood slowly spreads around him before going to the black screen credits - leaving us with nothing but the reflection of our grief-stricken, HORRIFIED faces.

However! Whoever lit a candle for Jon Snow in the days fo​llowing season 5's finale might have been a little hasty, as most fans don't actually think the Lord Commander will remain dead. The theories are that he will either be resurrected by the Red Priestess Melisandre, have warged into his direwolf, Ghost, or he will become a White Walker. And it looks like Kit has pretty much confirmed his return in a recent interview with Belgian magazine Humo.

Promoting his latest movie, WWI movie Testament of Youth, Kit said (translated on Reddit): 'Let's just say that Game Of Thrones will remain a part of my life for a while...I'll probably be in my thirties when it's over. One thing's for sure: the day I'm no longer onThrones is the day I'll bury myself in movie projects."

Since Kit is yet to celebrate his 29th name day, we're guessing he's in it till the end. We knew he'd be able to walk off those 92784 stab wounds!

How do you think he'll be inevitably resurrected? Tweet us @sofeminineUK!