It would be expected that pop’s biggest partier Miley Cyrus would have the birthday party to end all birthday parties. But no one could have predicted that it would be so raucous that One Direction’s Liam Payne would end up rescuing Calvin Harris from a flying dwarf. And that’s not even the craziest thing that happened at Miley’s wild 21st birthday bash…

Miley Cyrus wanted to celebrate her 21st birthday in style and so she held a wild birthday bash for her and a bunch of her A-list mates at the swanky Roosevelt Hotel.

But it looks like things got a little out of hand, as Scottish DJ Calvin Harris was almost knocked out by a flying dwarf at the star-studded event. No really.

Luckily the Feel So Close hitmaker was saved by nearby Liam Payne, who obviously has the reflexes of a jungle cat.

A relieved Calvin took to Twitter to tell his followers about his lucky escape, whilst also thanking the One Direction star for his quick thinking.

The 29-year-old – who is currently seeing Rita Ora – tweeted: “Big thank you to @Real_Liam_Payne for saving me from getting KO'd by a flying ‘person of unusually short stature’ tonight.”

According to sources, Miley had hired a bunch of dwarves to dance at her bonkers party, including two who dressed up as her and Robin Thicke to recreate their iconic VMAs twerking performance.

It was during this act that the airborne incident supposedly took place, although it’s still unclear precisely what happened.

An insider revealed to The Sun: “Miley rented out the entire club and hired a team of party planners.

“She asked One Direction along and they arrived after the AMAs."

“It was full-on madness, with a mini-Miley, dancing pandas, twerking ladies doing the splits and Miley-inspired cocktails.

“Miley is friends with club owner Jeff Beacher and basically anything she wanted on the night, she got.”

A short Instagram video reveals a little of the bizarre entertainment put on by the birthday girl host, although sadly there are no action shots of Liam saving Calvin Harris’ life. .

Former fiancé Liam Hemsworth was unsurprisingly nowhere to be seen.

Earlier in the evening Miley had put in another show-stopping performance at the American Music Awards.

She closed the ceremony wearing a skin-tight cat print bikini and singing her tearjerker Wrecking Ball, while a gigantic projection of a cute pussycat mimicked her singing on a screen behind - where does she come up with this stuff?!
​
Was your 21st birthday bash as crazy as Miley’s? Tweet us @SofeminineUK. 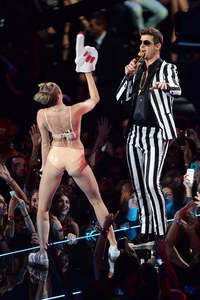