Miley Cyrus claims to love fashion, but lately it seems that she's out of her clothes more than she's in them. The Bangerz singer has once again bared all, this time going topless for her "Adore You" remix cover with Cedric Gervais. During a recent concert, she put a thong into her mouth that a fan had thrown onto the stage. Oh, Miley! Isn't it tiring being this headline-worthy?

But considering her past and recent concern shenanigans, we can't say we're all that surprised! 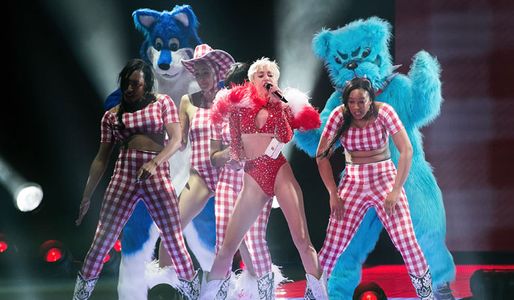 Much like Miley's outfits (or lack thereof), the Bangerz world tour has been far from dull. Her performance at concerts thus far has included a lot of crotch grabbing, simulating oral sex on a fake Bill Clinton, and even putting a thong into her mouth that a fan had tossed on stage. Yikes!

And, of course, sliding down a giant tongue.

Word has it that Miley has been seen cozying up to recent Golden Globe winner Jared Leto. The girl who's always naked and the man who never showers? Somehow, it makes sense.

Just kidding, Jared. We love you!

Recent gossip also suggests that Miley's fling with Kellan Lutz has fizzled out. The two were seen partying together in Vegas just before the new year.

One thing's for sure, Miley's music remains her number one priority... tied with stirring up controversy as often as possible, that is.

Do you have tickets to Bangerz? Tweet us @sofeminineUK!