One Direction: Niall Horan is a secret ladies’ man and the best kisser

When it comes to pulling girls, none of the One Direction boys have to work very hard. But if you were to think of the one lad with the most extensive little black book, most people would guess Harry Styles. But now the boys themeselves have revealed it's actually Niall Horan who gets the most lucky with the ladies.

Louis Tomlinson has let out a One Direction secret - who's the best kisser in the band.

And guess what? It's cheeky Irishman Niall Horan.

How exactly Louis knows who of his bandmates is best at using their lips, we're not so sure.

As one of only two single members of the band, 19-year-old Niall must get plenty of chances to show off his skills.

Louis, 21, told We Love Pop magazine: "Niall's the best kisser in the band."

The oh-so-modest Niall was happy to let other people decide, explaining: "Dunno. I've never kissed myself."

And it's not just Louis who reckons Niall's got a way with the ladies.

To which Louis agreed: "Yeah, he is a bit of a secret ladies' man."

So why is it Harry with the reputation as a womaniser?

Louis explained: "Niall's just too cute so you don't see it coming."

This skewed view of Niall hasn't gone unnoticed by 19-year-old Harry, who said in an online interview: "I take all the flack!"

Niall reportedly got lucky at V Festival with Ellie Goulding, who he's had his eye on for some time.

In the Magic interview the reporter mentioned they'd seen Niall "in action" at V.

To which the boys all started laughing and Liam responded: "That's another story for another day."

Well, anyone who's watched This Is Us will see - he is a bit of a charmer! 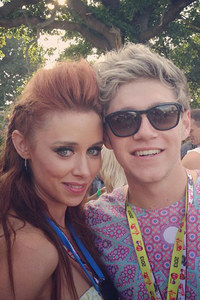