Niall Horan and Katy Perry – together for dinner? Do we dare hope, do we dare dream that they have become a couple? Could Katy Perry be giving John Mayer the boot? Is Niall finally ready to settle down with the world’s biggest pop star with whom he has such fun Twitter banter with? Nah, they’re just pals, but they are still all sorts of adorable. Nothing to see here John Mayer, sadly…

Niall Horan has been wining and dining Katy Perry as the two of them hang out together in New York City.

Well, not so much the wining, as scamp Niall is still a year shy of the legal drinking age of 21 in the USA, but the pair still seemed to have a great time in each other’s company as everyone’s favourite celebrity best friends. 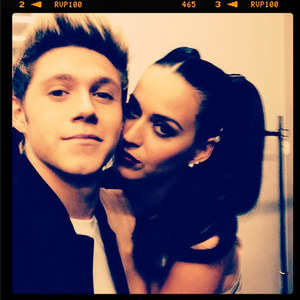 According to Glamour, the pair chilled out at members-only club Soho House yesterday, and neither were especially dressed up to the nines – Niall wore a varsity jacket whilst the Firework singer wore a blue beanie and a striped coat.

If we were being taken to a members-only club by a One Direction boy, we would totally wear a floor length gown and pearls at the very least!

The pair have been great pals since Katy Perry passed him through in his first X Factor audition, telling him: “Don’t let us down!” She then congratulated him when One Direction made it to Number 1 with their album, and the couple had a sneaky kiss at the 2012 VMAs with Niall joking that he didn’t think: “There will ever be anything cooler than kissing her…until I marry her maybe!”

The pair obviously enjoy each other’s banter, as they recently took part in a joke proposal on Twitter when they were both at a Tokyo radio station. Niall tweeted her saying: “I love you @katyperry! Ps. Will u marry me?”

Katy said “yes” back, and Niall tweeted: “She said yes! It’s happening! Haha” along with an Instagram of the two of them as a newly engaged couple. Hilarious!

We hope we see more of these guys in the future, a duet maybe? It might be tricky to get KP’s beau John Mayer on board though, as the two of them recently recorded their own duet, but at least they’ll get to see each other at the X Factor finale in a couple of weeks!