You might think that Katy Perry is all loved-up with John Mayer, but in actual fact she’s just agreed to another man’s proposal. And that man is no less than One Direction star Niall Horan. Are you as shocked and confused as we are?! Someone pass John Mayer a box of tissues…

In what will be a devastating blow to Directioners, Niall Horan has proposed to Katy Perry and the Roar singer has said yes!

The 20-year-old confirmed it himself so it must be true...

Their love affair began last month when the Irish boybander confessed his love to Katy on Twitter and asked for her hand in marriage.

Then today Niall posted a cosy Instagram pic of the both of them together on Twitter with the caption: "She said yes! It’s happening! Haha.”

If you’re wondering, that noise was the sound of millions of One Directioners’ hearts breaking. As well as John Mayer’s (obviously).

It will surely come as a relief to Niall, who had to wait a few weeks for the 28-year-old’s answer, having popped the question on October 21 following Katy’s X Factor performance.

He originally joked: "I love you @katyperry! Thank you! Ps. Will u marry me?"

Last year at the MTV VMA awards Niall and Katy shared an on-stage kiss, and earlier today they shared another in a snap that was posted on the One Direction Twitter page.

Although Zayn Malik, Liam Payne, Louis Tomlinson and Harry Styles are also in the shot, Niall and Katy have their arms wrapped around each other and he’s planting a smacker on her cheek.

Katy hung out with the boys at Music Station in Toyko, Japan, and she tweeted gushing about what an amazing day she had.

Today was so fun at music station in Tokyo ! Had such a laugh with the lads and @katyperry ! Love that girl !

The Firework singer wrote: “Today could not be a better day! I get to hang with @pamyurin & @onedirection on MUSIC STATION in TOKYO!”

Niall retweeted his “fiancée’s” message and added: Today was so fun at music station in Tokyo ! Had such a laugh with the lads and @katyperry! Love that girl!”

There’s clearly a lot of love between the pair - Perhaps Niall was inspired to take the plunge following bandmate Zayn's engagement to Perrie Edwards in August?

While we do think that Niall and Katy are another love match made in pop heaven, we do wonder what Katy’s boyfriend John Mayer will think about all of this…

Do you think Niall and Katy should become a real couple? Tweet us @SofeminineUK! 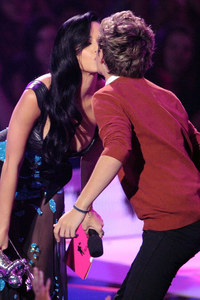