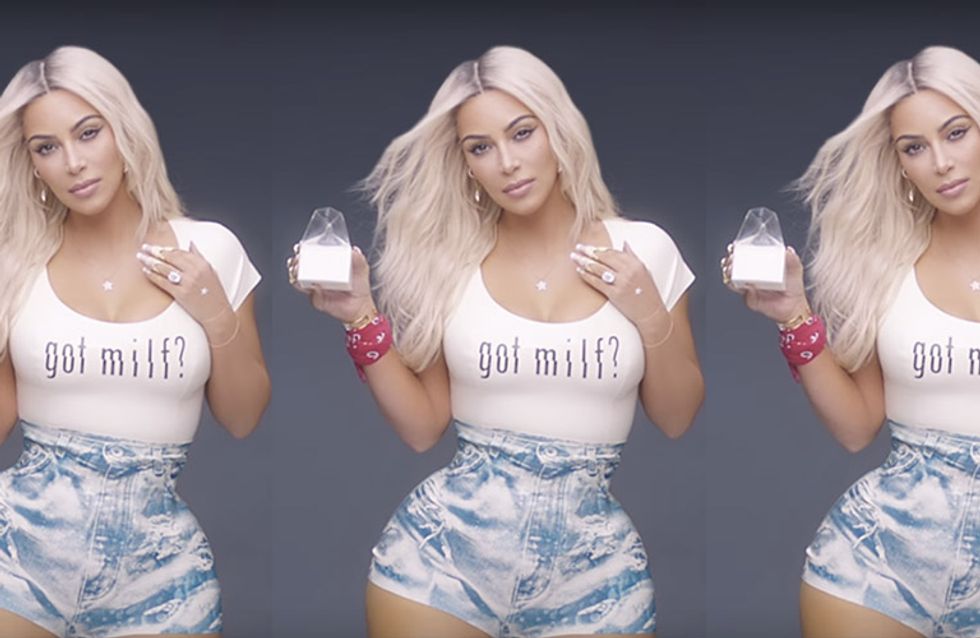 She's lost a whole load of lbs since the birth of baby Saint, but there's something a little bit questionable about Kim Kardashian's cartoon waistline in Fergie's new video and people ain't happy about it...

Have you seen the new video for ex-Black Eyed Pea Fergie's new track 'M.I.L.F $'? (that's: Moms I'd Like To Follow FYI not the ahem, other one) Well if you haven't then you need to right this second. We're already obsessed with it, and probs responsible for half of those nine million views. #sorrynotsorry.

​It features a whole host of celebrity milfs including mega babes Chrissy Teigen, Ciara and Kim Kardashian and a lot of erm, milk too. But it's Kimmy K who the spotlight's been firmly on since the video's release.

Musical fans aren't just getting their knickers in a twist because of the raunchiness of the visuals, there's also been online uproar because of Kim K's appearance in the vid, specifically her teeny-tiny waist.

Granted, she has shifted a whopping 60 lbs since giving birth to baby Saint in December, and worked damn hard to do so if her Snapchats are anything to go by, but fans reckon she's had some extra help in the form of some totally unnecessary computer wizardry.

She tweeted 'got milk?' with a link to her cameo, and her followers ain't happy...

@KimKardashian photoshop is everything in your life alright? lmao

@KimKardashian that Photoshop is real queen

@KimKardashian @Fergie that Photoshop is embarrassing! ?

Despite the controversy, Kimmy has denied any extra help and claims her barbie-like frame is the result of a waist-training corset and a strict workout regime. Taking to Snapchat she said: "F*CKYO Photoshop", adding the hashtag #CorsetLife to a short Snap of her filming Fergie's video.

Photoshop or waist-trainer gains, Kimmy's bod looks incredible already without the need for any digital alterations.

What's wrong with the natural look aye, guys? In other news we're loving the blonde.

What do you think of this Photoshop faux pas? Let us know @SofeminineUK!