Cara Delevingne has been compared with super model Kate Moss for many reasons, her rock and roll style, and her ubiquitous presence on the fashion scene but now her taste in men may be another factor. The young model has been hanging out with her counterpart's ex-boyfriend Pete Doherty and like so many other men before - he's a fan.

Cara Delevingne is said to be hanging out with Kate Moss's notorious ex, bad-boy Pete Doherty.

The 20-year-old has struck up a "friendship" with the musician after meeting at Paris Fashion Week in February, where Pete now has a house.

Sources for Look magazine have explained: "Pete thought Cara was amazing and so beautiful.

"Afterwards, he asked a friend to pass on a message and his number. Everyone was a bit unsure about it - he's certainly got a bad-boy reputation - but he was really insistent.

Dubious at first, "Cara took ages to reply, but she's a big Libertines fan, so once she did get in touch, they talked about his days with the band.

"Cara plays the drums, so Pete invited her round to his house in Wiltshire to play together."

Having controversially turned down advances from Hollywood A-Lister Leonardo DiCaprio for being too old, it must be the rocker vibe that would keep Cara interested in the 34-year-old singer.

The insider added: "He thinks Cara is rock 'n' roll personified." and is totally "besotted".

He has described her as the "female Libertine" and has "been writing lyrics and poems about Cara and says he wants her in his next music video."

Unsurprisingly people close to the Burberry model are not keen on letting the relationship flourish.

A source told the mag: "It'll be a disaster for Cara if she hooks up with Pete.

"Cara's mum - a recovering heroin addict herself - and sisters must be furious about it.

They're bound to be worried about her constant partying and Pete's not exactly clean living."

Those close to her are urging her not to get involved with him; "Everyone's been warning her to stay well away from him."

Who turns down Leo for Gaz from Geordie Shore and Pete Doherty? 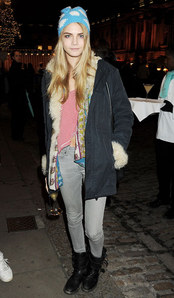 Francesca Menato
…
#hook-up
For all the best videos, memes and shareable news!