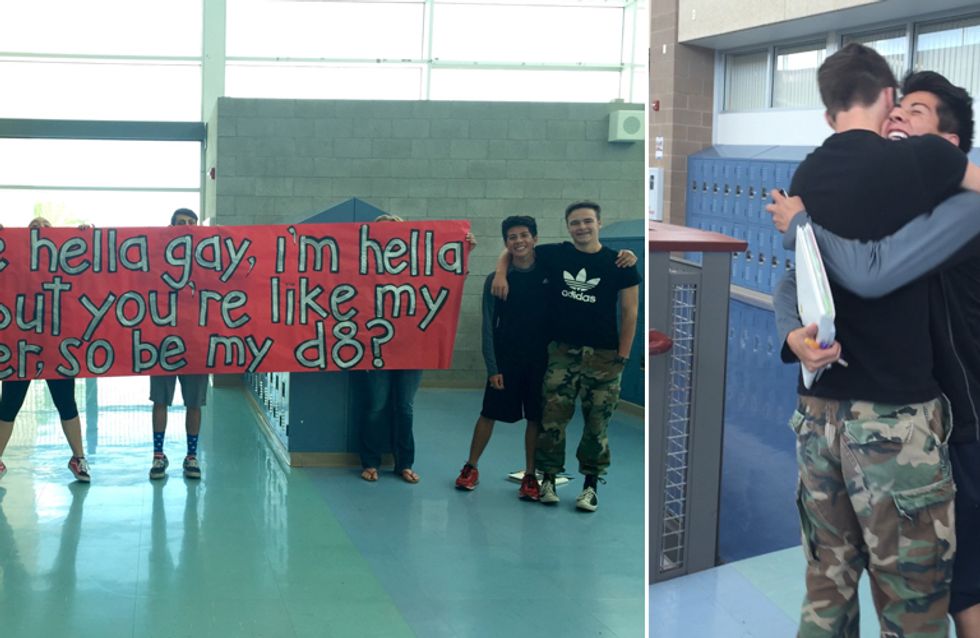 Jacob Lescenski is straight and his best friend Anthony Martinez is gay. In a move that proves we are living in some amazing times, Jacob asked his best friend out to Prom with a huge sign reading: "you're hella gay. I'm hella str8, but you're like my brother, so be my d8?" Hang on, we're just going to fetch some tissues...

It's that time again for American kids: the Prom is coming up. Since in the UK these events generally consist of coming to school in a fancy car then maybe having a disco in the evening, it's fair to say that American high schools take the evening much more seriously, even as a Rite of Passage.

We also know that inviting a date to the Prom is also a HUGE deal (yeah, we've seen enough teen movies to know our stuff, thanks American Pie), but for Anthony Martinez of Las Vegas, this time of year comes with a bitter aftertaste. The teenager outed himself as gay a few years ago and has since been unlucky in love.

However, things took a turn for Anthony's depressing Prom night when his best friend Jacob Lescenski asked him out instead. Jacob is heterosexual but the pair are like brothers, which is probably what led to Jacob surprising Anthony with THIS:

In a post, Anthony described his best friend Jacob, saying: “He’s a real man. Given that he has the guts to fulfill my gay student council dream of always helping out planning dances, and never getting asked. I couldn’t ask for a better person in my life.”

Jacob said: "I saw my best friend Anthony, who absolutely wanted a date. Then I thought about what he is a great guy and that he really deserves a date."

We couldn't be more excited for Anthony and Jacob's Prom pictures, even though we know deep down we'll never have a friendship like this pair! What do you think? Tweet us @sofeminineUK!