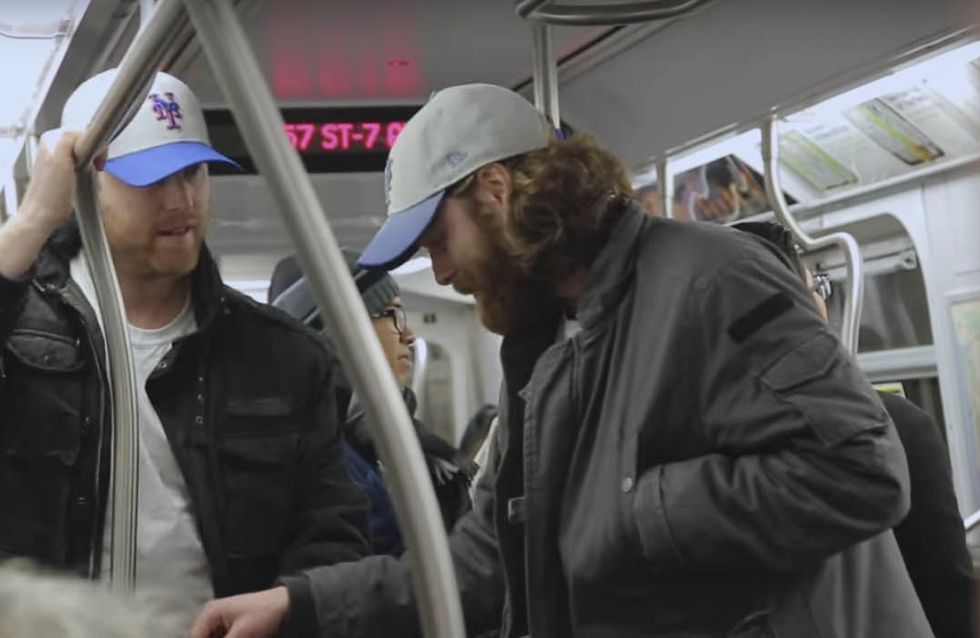 Tube journeys are hard at the best of times, but what happens when you become embroiled in an argument between a group of commuters and their future selves over whether they should build a time machine? See, your journey doesn't seem so bad now, right? Jokesters Improv Everywhere take over the subway with their intricate skit and it's going to brighten up your day, we promise.

Guys, you can stop doing pranks now. We've found the prank that trumps all other pranks. Why? Because it involves a time machine and four sets of twins.

The comedy group Improv Everywhere - whose slogan is 'We Cause Scenes' - came up with the prank which is described on their website as: "A man enters a subway car and announces he is raising money to complete his time machine. At the next stop, his future self enters to try to talk him out of it. More and more time travellers convene on the subway car as the train rolls along, surprising the random commuters caught up in the middle."

It's not the first time the tricksters have used twins as part of their pranks - in 2013 they used two sets of twins for a Back To The Future style prank, and eight years ago they used 15 pairs of identical twins in a subway car for a prank called Human Mirror.

And whilst no one seems to fall for the idea that the actors' twins have come back from the future to save them, they still get a laugh from fellow commuters. Check it out below!

What do you think of the prank? Pretty good right? Let us know what you think! @sofeminineUK

This Brilliant IKEA Prank Could Happen To Any Of Us

Spider Dog Is The Most Terrifying Prank Of All Time