Swifties were left disappointed on Wednesday after the Taylor Swift's Biggest Fan contest was cancelled following reports that a 39-year-old man was the winner. Online pranksters with some both jokey and creepy messages were thought to be behind the results.

The 'Taylor Swift's Biggest Fan' contest was scrapped this Wednesday following reports that a "creepy" 39-year-old man had somehow won.

A local Boston radio station had created the competition for all those desperate Swifties out there.

The grand prize was two free tickets to one of 23-year-old Taylor’s shows and a backstage pass to meet the starlet in person.

But when KISS FM learnt there was a voting scam, designed to make a mockery of the competition, they were forced to call it off.

The station had encouraged voters to select a contestant and visit their unique link, but this opened up the system to spammer and vote hackers.

Taking advantage of this, trolls used the Reddit's 4chan forum to post a link rigging the votes.

The forum post included a description of a hopeful named 'Charles'.

It explained why people should vote for the "creepy 39-year-old" who would "like to crush all those girls’ dreams (and then sniff Taylor Swift’s hair cuz he's into that)."

The people behind the competition did not think it appropriate to "help a fat old guy creep on Taylor Swift."

They then released a statement about the cancellation.

It read: "Disappointingly we have determined that the integrity of the Taylor Swift's Biggest Fan contest has been compromised.

"In accordance with our contest rules, effective immediately, the contest has been terminated.

"We apologise to all of our loyal listeners who have participated." 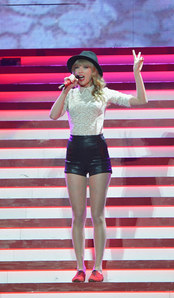