The Grumpy Cat Christmas Movie You Didn't Know You Wanted 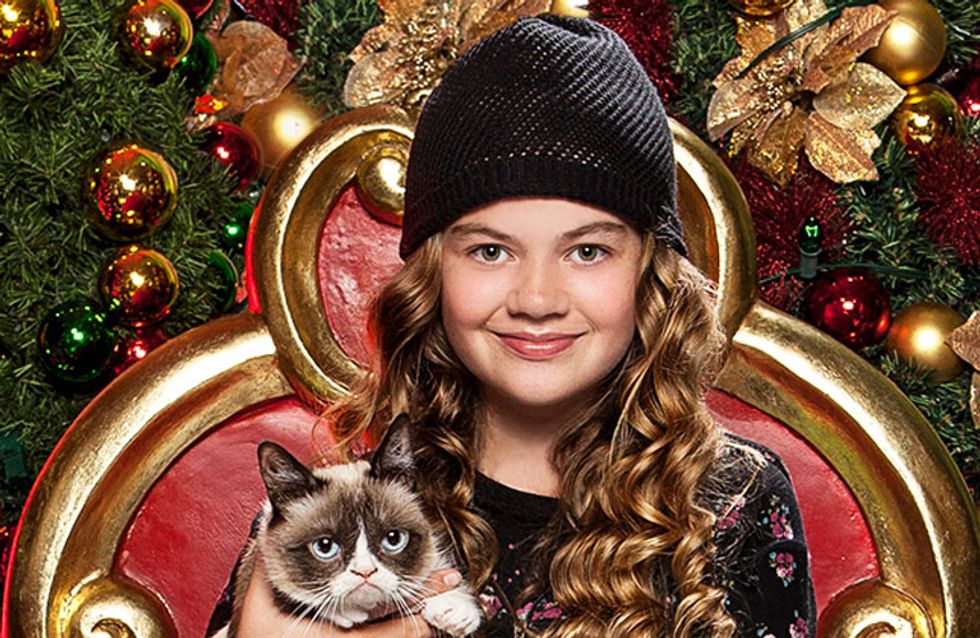 Grumpy Cat has stepped out of your browsers and onto the silver screen!

The superbly deadpan Aubrey Plaza will be doing the voice of Grumpy Cat in Lifetime's new movie, Grumpy Cat's Worst Christmas Ever! The beloved Internet sensation's real name is Tardar Sauce and the grumpy looking cat shot to fame a few years ago.

According to the Hollywood Reporter, the TV movie is about "a pet-store cat that is perpetually overlooked and the 12-year-old girl who can communicate with her.​" Well I'm a little skeptical of Tardar's range considering the one face she pulls is a grumpy one, but Christmas TV movies are known for being weird, poorly acted, sentimental piles of junk so Grumpy doesn't have much competition.

It's obvious from the trailer released yesterday that this movie isn't gonna win a Golden Globe. Also, who asked for this TWO HOUR flick to be made? Grumpy's certainly a success but perhaps Lifetime's taking the Internet meme too far? Nevertheless, this new cult classic is set to air on November 29th!

Check out what people are saying!

grumpy cat movie... It's a fucking cat meme. Who seriously is dumb enough to make a movie off of a stupid cat meme? stupid people.

Not only is this totally lame, but the voice of Grumpy Cat is ALL WRONG. #grumpycatsworstchristmasever http://t.co/MOHsAN7OrZ

Of course Aubrey Plaza voices Grumpy cat. Her spirit embodies every bit of that feline. #grumpycatsworstchristmasever

#grumpycatsworstchristmasever makes me wish the internet was never invented.

Grumpy Cat just signed a 1 million dollar movie deal. A cat just made more money that you ever will. Have a nice day.

No meme should ever be turned into a movie. Im talking to you, creators of Grumpy Cat's Worst Christmas Ever. #grumpycatsworstchristmasever

Aubrey Plaza is playing Grumpy in the grumpy cat movie. This is AWESOME XD #GrumpyCat #grumpycatsworstchristmasever

I like dumb internet fads as much as the next moron, but Grumpy Cat needs to just go away!

So excited for the #GrumpyCat movie on @lifetimetv. #grumpycatsworstchristmasever

Do you think the Grumpy Cat movie is awesome or totally unnecessary? Tweet us @sofeminineUK!

12 Signs You're Suffering From A Serious Case Of Frienvy

11 Reasons Everyone Should Have Robbie Williams As Their Birthing Buddy