The Most OMG Celeb Magazine Covers Of All Time

by Emmy Griffiths Published on 24 March 2014 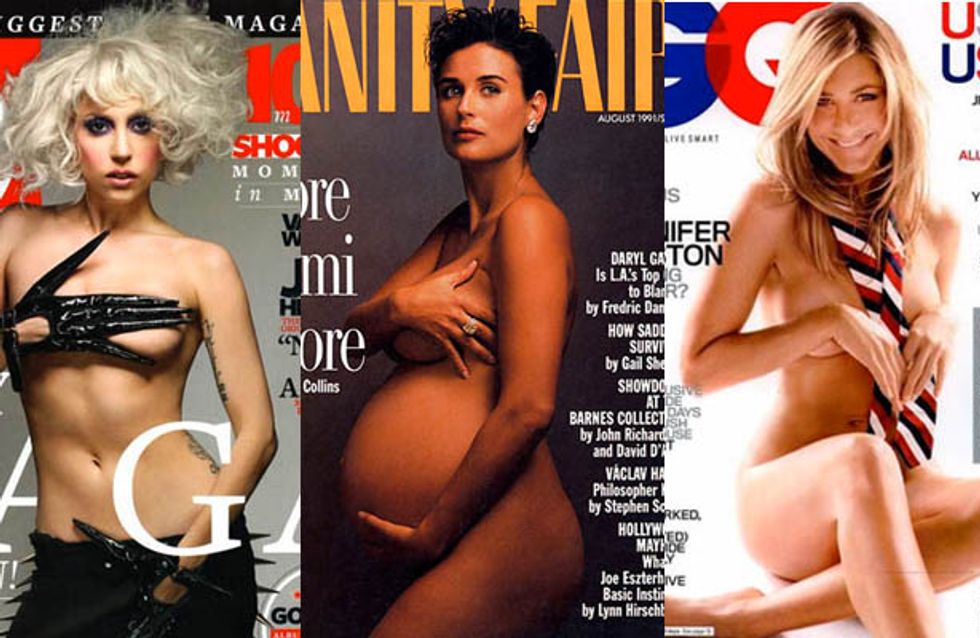 Kanye and Kim graced the cover of Vogue and caused controversy last week, but they're not the only celebs to front a magazine and get tongues wagging. From the over airbrushed to the over styled, to the extreme posers and the generally inappropriate (aka nude), these are the contro OMG magazine covers that are going down in history.

Kim Kardashian and Kanye West's wedding Vogue cover angered fans of the magazine and other celebrities alike. As a market leader and a taste maker, some celebs questioned the choice to put Kanye and Kim on the cover. Actress Sarah Michelle Gellar even tweeted: "Well......I guess I'm cancelling my Vogue subscription. Who is with me???"

Even the naturally stunning Kate Winslet couldn’t explain her otherworldly beauty on the cover of US Vogue back in October 2013. The cover, which shows her with utterly flawless with wrinkle free skin, eyes as blue as the ocean and stunning silky hair, was snorted at by just about everyone for its obvious fakery. Go easy on that airbrush please Vogue!

Miley Cyrus was laid bare on the front of W magazine, showing the 21-year-old (with no eyebrows) naked in a languid state whilst snuggling a pillow with her thighs. Oh Miley. Why.

This definitely caused a few raised eyebrows and dropped jaws back in 1993! Side note: We love those high waisted pants!

Annie Leibovitz photographed John Lennon and his wife Yoko Ono at the couple's New York City apartment. The final photo, according to John: "captured our relationship exactly." Five hours later, he was shot dead. The cover was released as a tribute to Lennon.

Ugh, of course this happened. Kanye West posed as Jesus for a Rolling Stone’s cover, complete with a crown of thorns. *Eyeball rolling.

Kylie Minogue was wearing underwear in this shoot, but it was edited out for the cover snap. Not classy GQ. Not classy.

The 1991 Vanity Fair cover showed a seven-months pregnant Demi Moore, and although it is now one of the most highly regarded magazine covers of all time, at the time it was labelled grotesque and obscene. That's NO way to talk about a pregnant woman - especially when she looks this hot!

Lindsay Lohan posed as Jesus for the cover of Purple magazine. You only need to read that sentence to know why it was controversial. Lindsay for heaven sake, use your head!

Kate Winslet was unhappy with her GQ cover when she was airbrushed to the extreme back in 2003. She said: “The retouching is excessive. I do not look like that and more importantly I don’t desire to look like that.” WE LOVE YOU AND EVERYTHING YOU STAND FOR KATE.

When Britney Spears did a Rolling Stones cover that showed her snuggling a teletubby whilst chatting on the phone, needless to say people weren’t impressed with the ‘inside the bedroom of a teen dream’ angle, and the American Family Associated called for “all God-loving Americans to boycott stores selling Britney’s albums.”
We wonder what they have to say about Miley...

W magazine featured Angelina Jolie on the cover in a beautiful shot taken by Brad Pitt. It’s pretty conventional…until you see the tiny baby hand by her boob! Breastfeeding on a magazine cover? It's controversial, but we like it!

The cast of True Blood appeared totally naked and covered in blood on the cover of Rolling Stones magazine. Sure…why not?! Unfortunately the fairly gross photoshoot had people asking: “effing hot or effed up?”

When America’s sweetheart stripped off for the cover of GQ magazine wearing nothing but a tie and a grin, she caused her fair share of controversy. What happened to Rachel?!

The Glee stars took part in a sexy GQ photoshoot, dressed as Hit Me Baby One More Time style school kids, and since they were (at the time) playing teenage characters in Glee, the Parents Television Council was NOT happy with the shoot. Dianna Agron defended the shoot, saying: “If your eight-year-old has a copy of our GQ cover in hand…I am sorry. But I would have to ask, how on earth did it get there?” Oh so sassy.

This looks like a certain Demi Moore magazine cover… When Jessica Simpson did the naked-pregnant thing for Elle, the cover was subjected to censorship, with stores hiding the image with cardboard when it hit the stores.

Ellen Degeneres coming out on a magazine cover was a hell of a way to do it, and became one of Time magazine’s most famous covers. You go Ellen!

Were you shocked by any of these magazine covers, or do you think we're past being shocked at celebs in the buff nowadays? Tweet us @sofeminineUK