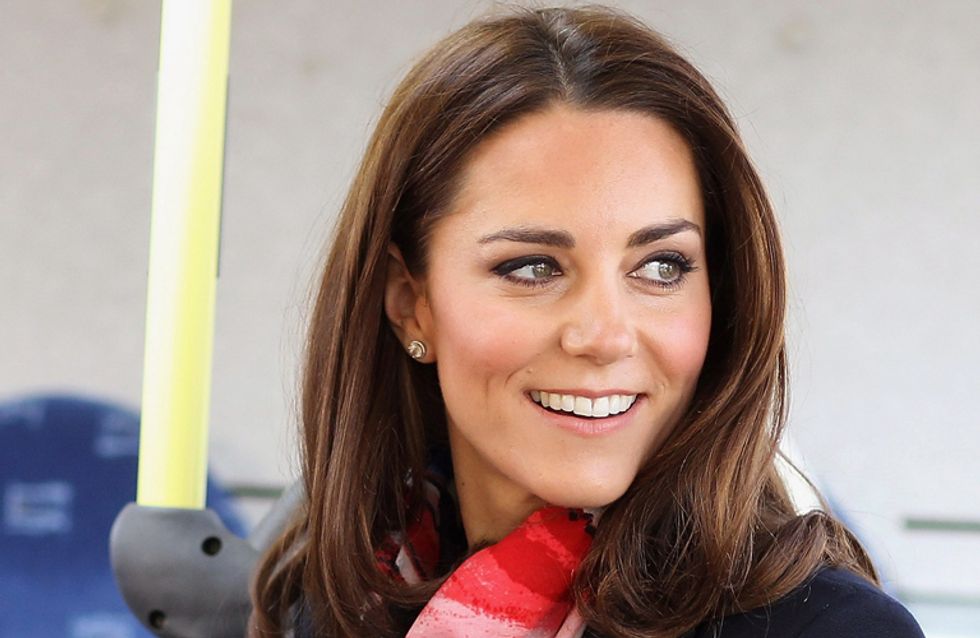 Every girl knows Kate Middleton is the eptiome of English rose and she's the closest us Disney lovers will ever come to having a real princess to idolise. Her clothes, her loving man, her ability to maintain her skinny frame while pregnant, it all makes me want to simultaneously gag and want her life. Given that she's the anti-Kardashian, we thought it would be interesting to see what the men in America had to say about the woman that stole every girl's hopes and dreams.

Unlike almost every other women American men idolise, Kate Middleton has never starred in a sex tape, won Sports Illustrated's Rookie of the Year, or banged Leonardo Dicaprio...as far as we know. Her squeaky clean image as a loving wife, a mother of (soon to be) two kids, along with her tasteful wardrobe makes her an unlikely candidate for Sexiest Woman Alive in the U.S.A. Although not always known for their great taste in women, we decided to show your average American male some pictures of Duchess Kate and see what they had to say about her appeal. So can the Americans spot a quality female when they see one? See for yourself:

All about the hot 'mom' vibes

"If I had to be honest Kate Middleton is my dream girl. Very presentable to parents but would look sick in a pair of sweatpants on the couch."

"Would love to pour some milk over her and pretend she's Cheerios."

"A girl that looks like that and is into dudes with receding hairlines and overbearing mothers? Where do I sign up?"

"Guaranteed she's 100% an undeniable savage in the sack. She can try to hide it under the auspices of maternal wear and international diplomacy, but she's definitely into some 50 Shades of Grey business and I'd be down to explore how deep her kinky English world could get."

"She's royalty. Got that old money. I wouldn't mind being her boo."

"I think her conservative style is what makes her so attractive. She is leaving a lot to the imagination, which often times is more sexy if you have the looks to back it up, which she certainly does."

"Overall don't think she's incredibly hot or sexy. More cute. That being said, any female with a British accent can pencil herself in for a few Fireball shots from me and a one way ticket to my house of love."

"If she divorces Will does she still get half of his dough? If so, count me in."

"Pretty sure my mom would love me more if I brought home a girl like that."

Not their cup of tea

"I'd honestly rather just party with Harry. Is that weird?"

"Don't know if I can find a girl attractive that chose the Prince with the receding hairline over the ginger Prince. Us gingers got to stick together. Don't fear the firecrotch, Kate!"

"If I was one heartbeat away from being King of England I would be getting boy band ass [referring to the level of girls that throw themselves at members of boy bands, just look at One Direction.]"

"My love of British women begins and ends with Emma Watson. Sorry, Kate. Only room for one."

"I'm more of a Team Pippa guy, I mean that dress at the wedding? The booty that launched a thousand ships."

"Wouldn't say Kate's my favourite. Have you seen Pippa? More importantly, have you seen Mrs. Middleton? I'd honestly just be happy to be in the middle of a Middleton sandwich. I don't discriminate."

"Kate's dimples are cute as hell, but my love for Pippa's backside is just too strong. I think with the wrong head, sue me."

"Call me old school, but I was more of a Lady Di kind of guy. Kate may know how to smile for the crowd, but Lady Di knew how to give those bedroom eyes. Also, don't dig those crazy hats she's wearing."

"I need more junk in the trunk. Sorry, Princess."

Check out all of the quotes in their glory here:

What do you think of American men's reactions to Kate's hotness? Tweet at us! @sofeminineUK

12 Lavish Gifts To Gift To The Royal Baby