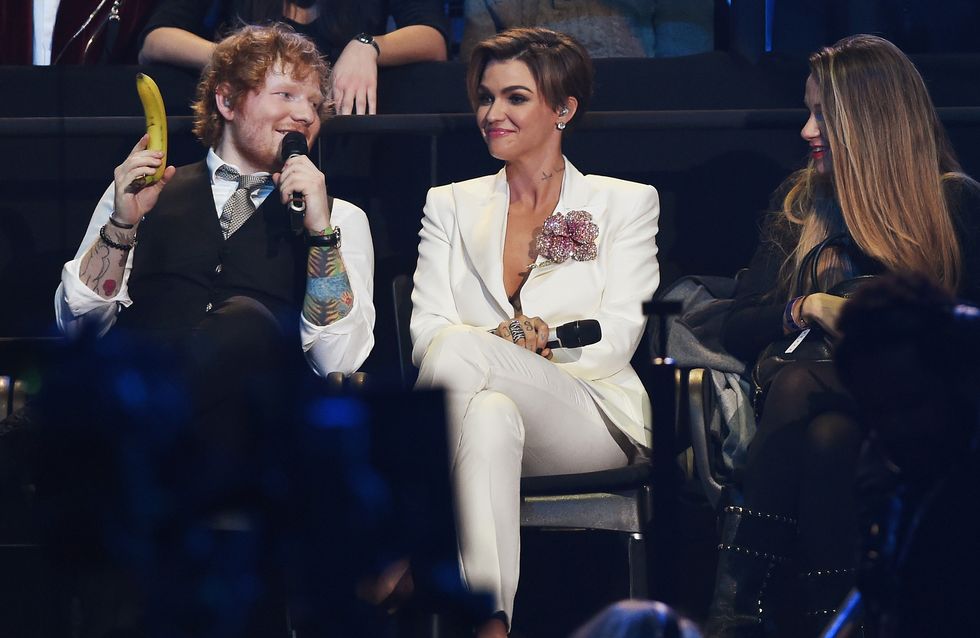 Ahh, the EMAs. Sister to the VMAs and a vehicle for all of Ed Sheeran's rude jokes, apparently. He was like all of our drunk uncles at a Christmas party rolled into one. But he and co-host Ruby Rose put on a great show. (What is it with that girl's face? It's just BEAUTIFUL.) Here's all the top moments from last night's show in Milan.

2. Ed Sheeran was all about the innuendos

Seriously, get that guy on Loose Women.

4. Jason Derulo performed 'Want You To Want Me' entirely on a hoverboard

Which is no easy feat, as we at SoFem know.

Despite not having released an album since 2012.... I mean, she wasn't even there! Give the others a chance Rhi Rhi for crying out loud!

He won five out of the six awards he was nominated for. Which is amazing. He's so ready to take over the world for the second time.

He has an actual aptitude for comedy, which is such a relief because it prevented the whole presenting thing from being another awkward bunch of moments we have to change the channel from.

Which was a surprise for everyone who thought they were just going to be walking the carpet like everyone else. Oh hell no! Sass everywhere!

9. Ed Sheeran really wanted Mark Ronson to drink some of his gin

10. .... Which was fine because Ed seemed pretty drunk

Ed had a drink in his hand literally all the time, which probably led him to say this. Gins for everybody!

10. Jason Derulo was just smoking a cigar and drinking whisky on the red carpet

Let's leave those kind of antics to Kanye, shall we Derulo?

11. Ruby Rose totally copied Justin Bieber's outfit, and he was not OK with it

This is why everyone should call each other to discuss outfits before hand!

12. Ruby Rose had a flame thrower

For absolutely no reason at all. Still, Ruby Rose is a goddess in our eyes - she can do what she wants.

13. Which left Ed with the glitter cannon

Which actually looked way more vicious than the flame thrower. It scared the socks off of poor Ed.

14. Novak Djokovic was there for some reason...

It didn't even matter that he seemed a little out of place because people were fangirling all over him anyway.

OMG, my heart was beating so loud! @DjokerNole, you were AMAZING! I love you, honey! #NoleTheBest ❤❤❤❤❤❤❤❤ #MTVEMA pic.twitter.com/wKpvCyfpeu

And a cute little hat. He looked like a chimney sweep from Mary Poppins. I mean, it was no giant hat moment but we certainly still enjoyed it.

It was only natural that one of Italy's greatest singing talents performed at the EMAs in his native country. But with pop singer Tori Kelly? Like Nutella and peanut butter, it was a weird combo, but it just worked. Kelly sung her new single Should've Been Us as well as mashing it up with TLC's Scrubs.

What was your favourite bit of the EMAs? Let us know! @sofeminineUK

​​​2014 MTV EMA's: Nicki Minaj KILLED It In These Head-Turning Looks