by Pascale Day Published on 4 August 2016 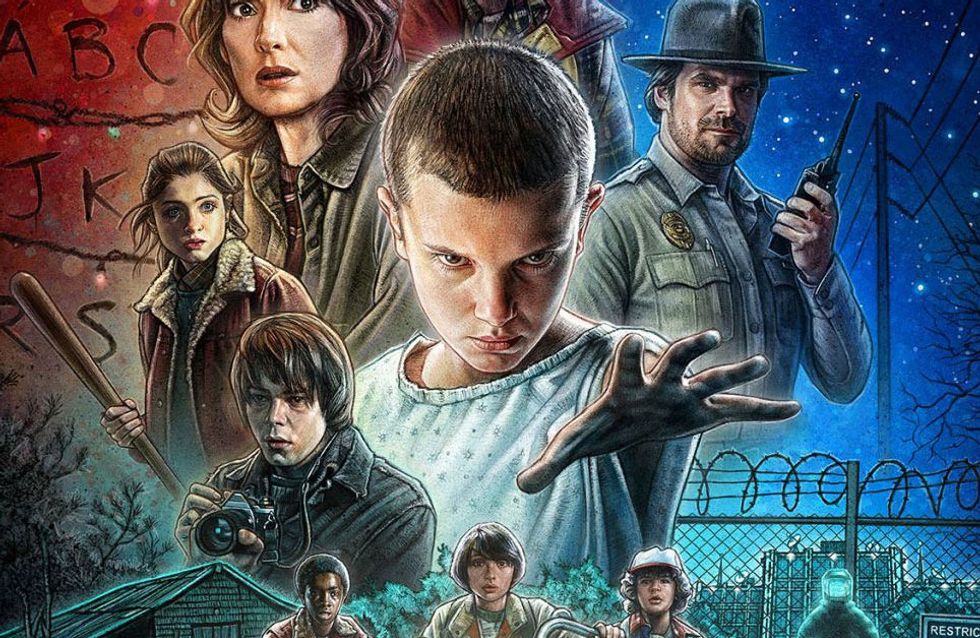 If you haven't seen Stranger Things, Netflix's latest original series offering, yet then what are you waiting for?! Walk out of wherever you are, go home, put it on, and then come back to us when you're done. There's not an excuse in the world good enough as to why you haven't indulged in the Duffer Brothers' new sci-fi drama. For those who have seen it: my friends, we MUST discuss. Here's all the things you'll only know if you've seen Stranger Things. Spoiler alert!

1. You'll be getting major envy over Mike's cheekbones

I mean, all the characters have something we want: Eleven has the jawline to carry off a shaved head with finesse, Nancy has the style, Dustin has those curls, Joyce has those delightfully crazy eyes. But Mike's cheekbones could cut glass. They are strong. They are the kind of cheekbones that long for a bit of blusher. Which is why WE SHOULD HAVE THEM.

2. You'll be checking Ebay for the Star Wars Millennium Falcon...

Y'know, the toy that Dustin repeatedly drops on the floor in front of Eleven to get her to make it float, bringing tears to the eyes of Star Wars fans and collectors everywhere.

3. ...Only to discover it's now worth a small fortune

HOW MUCH?! Seriously, you could now afford to buy a car with the money made from one of those bad boys.

4. You'll be questioning how old you are when you see Winona Rider...

We still remember Winona from the 90s classics like Beetlejuice, Edward Scissorhands and Girl, Interrupted. Where has the time gone? How does she look so much older? How are we ALL so old?! We want the 90s back!

But then you see her at the series premiere and she looks waaay more like the Winona we all know and love. Phew! Damn you and your trickery, Stranger Things.

6. You want to ditch the iPhone and invest in some walkie talkies for all your friends

If only to be able to use the phrase "over and out" at the end of a convo.

7. You're getting the urge to shave your head a la Eleven

A badass girl with a badass haircut? Count us IN. Milly Bobby Brown stated that her hair inspo when it came to shaving her head was Charlize Theron in Mad Max, and we can totally see how that encouraged her.

8. You'll be wary of Christmas lights for at least a year

We don't want any communication from the Upside Down this Christmas, thank you very much. We'll just stick to sitting in the dark for a while.

9. You'll find yourself questioning your crush on Hopper

He's like, a heavy drinker, a heavy smoker, a womaniser..... but he's also kinda hot? I mean the way he punches nearly everyone he meets in the face is a little bit dreamy and the way he commits to helping Will makes us want to hug him real tight. It's SO confusing.

10. You also kept a tally of all of Hopper's punches

And rated them, obvs.

11. You're probably wondering where you've seen Steve before...

Steve gives you that niggling feeling, like you've seen that face and that hair somewhere before. Luckily this fan theory confirms the thought that was lurking in your subconscious - Steve Harrington is actually the father of Parks and Recreation's Jean-Ralphio. Which explains why at times Steve seems like the wooooorst.

I think after all the #StrangerThings happened, Steve changed his name and got involved with local Indiana politics pic.twitter.com/3O7G0l0i5G

12. You keep getting a strange hankering for eggos

You wanna try those delicious frozen waffles for yourself. The way Eleven eats them with such fervour makes us think that they may be the unsung superfood hero of 2016. Out with kale, in with Eggos!

13. You can't understand why Nancy and Jonathan couldn't just make it work

I mean yeah, it's undeniable that Steve has a great head of hair, maybe even the greatest head of hair, but Jonathan's got that sensitivity. He would never smash up your camera. Sure, he might spy on you with it, but that boy only has good intentions!

14. The word "snowball" is now triggering for you

MIKE WAS GOING TO TAKE ELEVEN TO THE SNOWBALL! THEY WERE GOING TO DANCE AND EAT EGGOS UNTIL THE SUN CAME UP! AND NOW HE CAN'T! WHY IS LIFE SO UNFAIR!

15. Eleven should have ditched the blonde wig aaaages ago

Her buzzcut is waaaay better than the weird blonde wig the boys dress her up in. Sure, it worked for E.T, but I'm pretty sure Elle could have passed for a student in the school without the weird get-up.

16. You're now using the Stranger Things font for everything at work

Is it acceptable to make all your presentations, letters, business cards, word docs and emails all in the classic 80s Stephen-King-like font? No? Well, we're gonna do it anyway.

17. No one seems to care about Barb all that much

Poor Barb. First, she's left by her bestie for a man - has Nancy never heard of ovaries before brovaries? - and then she gets killed in the Upside Down by the Demagorgon. And does anyone care? No! Not even Nancy! Not even her own mum! When Eleven reveals in the pool that Barb is "gone" Nancy seems upset for mere seconds, and then swiftly moves on. How about go and tell her parents Nancy! Gaahhd.

18. You immediately Spotified the soundtrack

SO. MANY. CLASSICS. The Clash, Jefferson Airplane, Joy Division, Dolly Parton, TOTO?! Honestly, there's something in this soundtrack for everyone. Ain't no one gonna tell us they don't enjoy a bit of Africa. Pshh.

Stranger Things might be set in the early eighties, and we all know that the eighties are a time we like to pretend didn't happen when it comes to fashion, but DANG - Lucas is nailing this whole style thing. Corduroy Levi's jackets complete with fur trim, on point bandana, and bomber jackets, we're literally pinning Lucas to our Pinterest boards as we speak.

20. You've spent so many evenings in avoiding people to watch it, you can't remember what life was like before

How.. How do we live now? Knowing what we know? We can't go back to our old friends, they're nothing like the gang! There's no Mike, no Lucas, no Dustin! Not to mention we have no Eleven. Man, real life sucks. Might as well just find a new Netflix show to watch and not leave the house until season two gets made.

Have you watched Stranger Things yet? Let us know what you think @sofeminineUK

19 Signs Pokémon Go Has Literally Taken Over Your Life