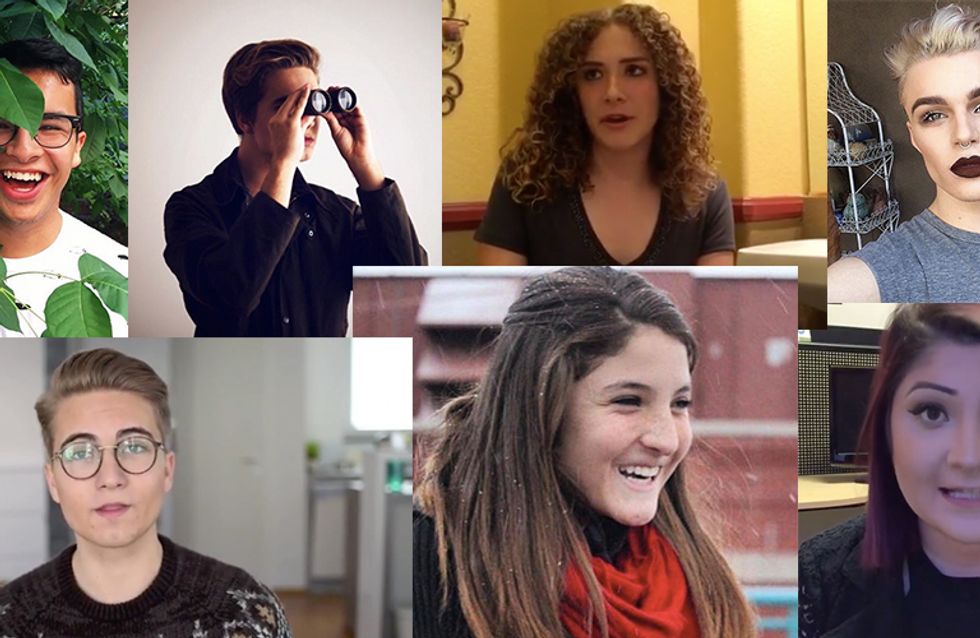 An Instagram account set up by LGBTQ pioneer and YouTube marketing whizz Raymond Braun is allowing people to come forward and share their experiences growing up as part of the LGBTQ youth, and damn, these kids are hella wise. From coming out stories or messages to their younger selves, these guys are spreading positive vibes all over Insta.

On Friday, Instagram launched their first ever LGBTQ video feed in collaboration with Raymond Braun. It could be found at the top of the Instagram Explore page, containing multiple videos from LGBTQ youth, including the first American college football player to come out as bisexual, Conner Mertens.

I'm proud to be a part of @raymondbraun's #VisibleMe project highlighting voices from LGBTQ youth for many reasons. Our stories are the most powerful weapon we have to combat homophobia, transphobia, and just garden-variety ignorance. Accurate, bold, and multiple representations of what it looks like to live and love as an LGBTQ person has the power to save lives. If one person can see themselves in another's story and think, "Wow, maybe everything will be alright," then hate has lost and visibly has won. Love yourself and allow others to love you. That's why I'm participating in the #VisibleMe project 🤘🏼

Raymond Braun started his career on the marketing team at Youtube and was soon promoted to LGBT Marketing Lead for his passion project #ProudToLove, YouTube’s first LGBT-themed consumer marketing campaign was picked up by the video giant. Raymond, who is openly gay, began making videos for the LGBTQ community, and became so popular that Raymond soon found that what started as a passion project was now needing his attention full time.

I'm so so honored to be apart of @raymondbraun's #VisibleMe project. In mainstream media, the LGBT+ community is often ... one-note. A butch lesbian with a flannel, a slender and muscular white gay man. Bisexual people can be protrayed as greedy, trans women as men in dresses (trans men are virtually unrepresented). The other facets of our community are practically ignored, erased, or altogether denied. I love what #VisibleMe stands for and I felt compelled to contribute --to be Visible. I am so proud of who I've become and my brothers and sisters and siblings in the community who have come this far with me. We are all different, all unique, and one day we will all be visible.

I wanted to participate with @raymondbraun in his #VisibleMe project because...it was just about time 😄 I know that I generally keep a lot of my more personal struggles under wraps, but this is a special instance. As a theatre kid, I'm privileged to have a voice - but it's not always my own. However, in this case, it is my voice (albeit brief) through and through. And yeah, "it's okay - you can do both!" 💙😜💙💋💙 Much love xoxo

I'm so proud abs honored to be apart of @raymondbraun 's #visibleme highlighting voices from LGBTQ, I'm inspired by #visibleme because it shows that platforms such as social media are trying to create change and awareness for People like me! I created this #visibleme video to speak my voice. This video is brought up from a place of loneliness, I used to think that by being transgender I would never be loved or even liked by anyone. I was wrong and I'm glad I have the support from my friends and family to be who I am and speak my voice. Thank you for watching! #visibleme

Raymond's new project #VisibleMe offers an invaluable platform to LGBTQ youth, giving the opportunity to share stories of struggle as well as offer advice. Raymond told Teen Vogue: "When you grow up feeling different, like there’s something about you that isn’t seen as conventional or traditional, it gives you an openness to colour outside the lines and chart your own life. I hope #VisibleMe encourages everyone to celebrate diversity and embrace what makes them different. We all have that spark within us.”

@VisibleMe now has its own Instagram account! Let's show some love to the LGBTQ youth who shared their stories. ❤️💙💜💚💛 #VisibleMe | 📸 : @jeysonpaez

Since the hashtag, @visibleme has become an actual Insta account set up by Raymond, and a Facebook page has also been set up for people to continue telling their stories. If you want to join in, simply make a video or take a photo and upload it to Twitter and Instagram with the hashtag #VisibleMe.

What do you think of #VisibleMe? Amazing right? Let us know! @sofeminineUK