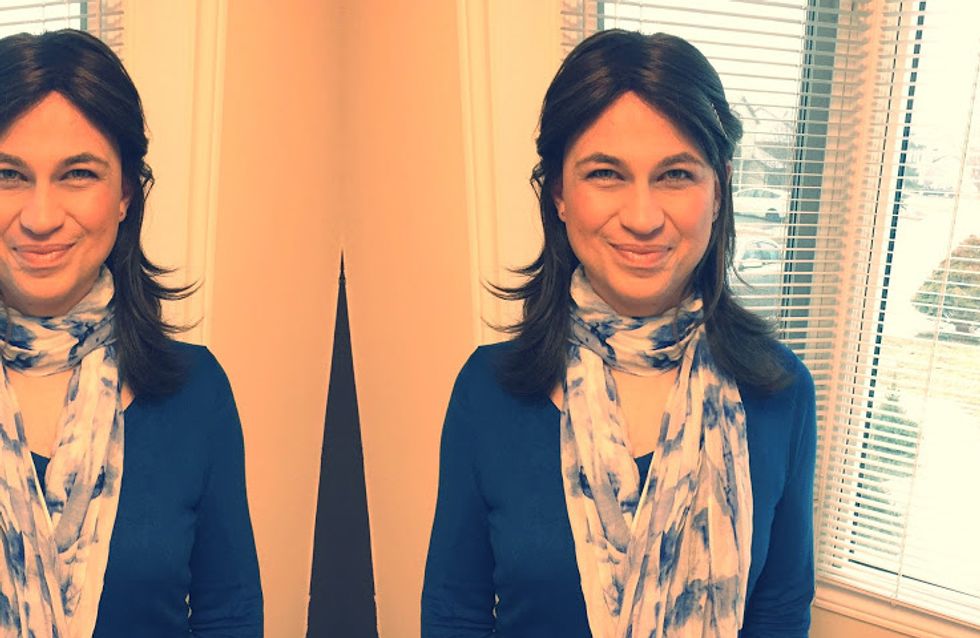 After 19 years of marriage, Amanda Knox’s wife came out as transgender to her and their three children. And as if that wasn’t scary enough, she then came out to her workmates, and they surprised her in the most wonderful way…

Two years ago, Amanda remembers on her blog Maven of Mayhem, her daughter came out as transgender. Alexis, now 13 sent an emotional email to her mother pleading with her for help. She was depressed, anxious, and one of her teachers told Amanda “She’s shutting down… I’m afraid we’re losing her.” But as soon as Alexis came out and revealed her true self, her parents were there to support her. Amanda notes that the change in her is phenomenal: “that tearful, fearful little person I once knew as my son has morphed into the most incredible young lady… Her confidence has grown along with her smile.”

But what Amanda didn’t realise was that her daughter was not the only one having a tough time coming to terms with her identity. Amanda’s wife Zoe, then husband, was also trans, but had kept it in for all these years. Zoe eventually came out to her wife and three kids in July 2015, and has subsequently slowly continued to let friends and family know of her transition. Then, the only people left to tell were her workmates.

Obviously a very different dynamic, Zoe found that her workmates were arguably the hardest people to tell: “She dreaded coming out at the office. She works at a large technology company, managing a team of software developers in a predominantly male office environment. She's known many of her co-workers and employees for 15 or so years. They have called her "he" and "him" and "Mr." for a very long time. How would they handle the change?”

But Zoe did what she had been dreading - she sent a pensive email to her all of her coworkers detailing her transition. Then, she took a week off work, followed by a week working from home. Zoe was nervous about returning to work, but she needn’t have: since sending her ‘coming out’ email she had already received over 70 kind and welcoming emails. Then, when Zoe entered her office, her workmates had given her cubicle a girly makeover - decorated with glittery butterflies and beautiful flowers, Zoe’s old name had been replaced with her new name, and she even had a welcome card from the team.

Zoe’s first meeting of the day at 10am actually turned out to be a welcome party for colleagues meet and greet their new workmate, complete with cupcakes and plenty of hugs. The story on Amanda’s blog has received a crazy amount of support from other members of the trans community who have in turn been sharing their coming out stories.

What do you think of Zoe's inspiring story? Let us know! @sofeminineUK

Why Is Office Bullying Getting Worse And How Can We Stop It?