by Pascale Day Published on 4 April 2016 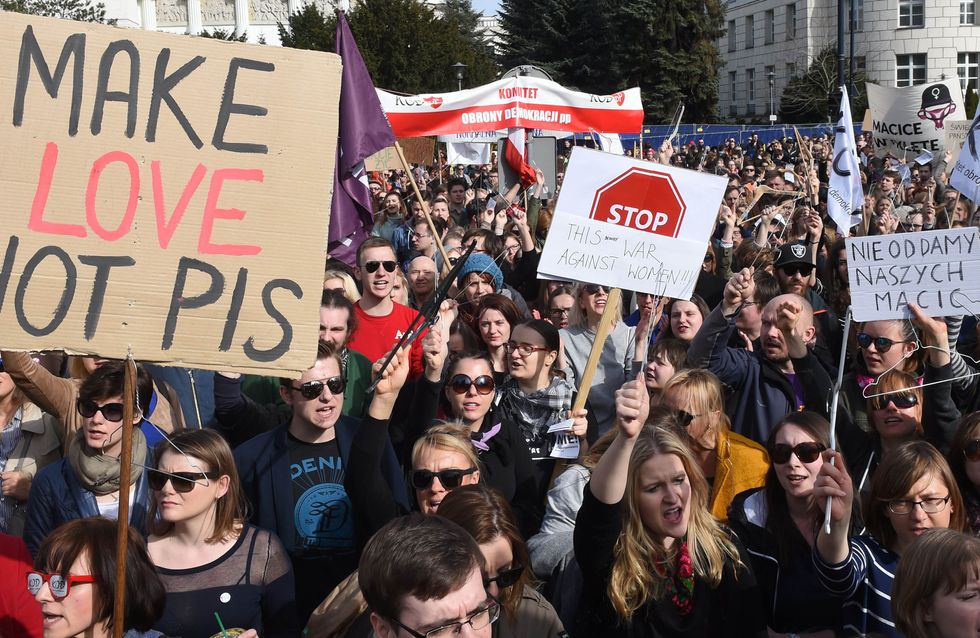 Women in Poland have been seen walking out of a church during a priest's reading of a letter that supports the plan to tighten up laws on abortion. Meanwhile, women's rights activists take to the streets of Warsaw to oppose the newest development in the war of women having the rights to their own bodies, which sees Catholic bishops and the Polish prime minister supporting the move to completely ban abortion.

Today, we're proud of women. As a priest read aloud a letter in church that was in favour of a total ban on abortions in the country, many women - and some men - stood up and walked out in protest.

The letter, which had been read out in churches up and down the country, was made public earlier this week by Polish bishops who called for the abortion rights of women to be scrapped:

“Catholics’ position on this is clear, and unchangeable. One needs to protect every person’s life from conception to natural death... We ask the lawmakers and the government to initiate the legislation...The life of every person is protected by the fifth of the Ten Commandments: thou shalt not kill. Therefore the position of Catholics in this regard is clear and unchanging.​"

The Facebook video, posted by Kamila Chomicz, has been viewed over 700,000 times since it was put up on Sunday, with many applauding the women who walked out.

The movement that is detailed in the letter that calls for the total abolishment of abortion in Poland has been backed by the country's conservative Law and Justice party (PiS). Meanwhile in Warsaw, a mass pro-abortion was underway, with thousands of women's rights activists joining forces to protest against the move to bring the law more in line with the Catholic church's teachings.

If you don't know much about Poland's current abortion laws, let us get you up to speed: the country has a long, fraught relationship with abortion. At the moment, abortion is banned in normal circumstances, but has three exceptions: 1. When the woman's life or health is endangered by the continuation of pregnancy; 2. When the pregnancy is the result of a criminal act; 3. When the fetus is seriously malformed.

​Until 1932, abortion was banned without exceptions, which is a law certain political parties, Catholic priests and bishops, and, amazingly, the current female Polish prime minister Beata Szydło, want the country to return to. When it comes to public opinion, 65% of people asked in a 2014 poll about moral support for abortion said that abortion was inappropriate. The Guardian reported that while statistics showed that currently only a few hundred abortions take place every year, pro-choice campaigners claimed underground abortions were common.

The protest on Sunday saw anti-abortion protesters carrying coat hangers - the grim symbol of backstreet terminations - and signs exclaiming 'Stop this bloody was against women', chanting "my body, my business." We hope that the women of Poland are successful in their efforts to sustain a more lenient law on abortion.