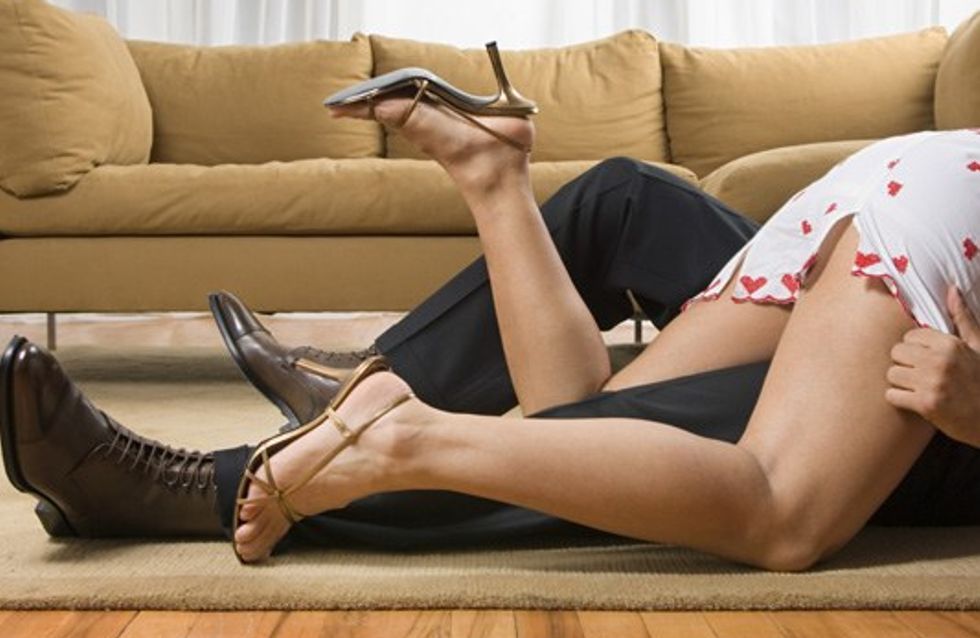 To swing or not to swing - that is the question.

Your mate's boyfriend is really cute. In fact he's more than cute - he's sexy, handsome, and (you've heard) is great in bed. You've secretly fantasised about him, but would you ever sleep with him?

The road to becoming a swinger may start with a simple swapsy party among friends but this isn't always the best place to start (the potential for falling out is huge), so if you're curious about sleeping with other people, while staying in your relationship, heading to swingers parties might be a better option.

Swinging might sound seedy but the reality is quite different. Once you, er, penetrate the swinging community you could find that it takes you by surprise, as a whole new way of broadening your sexual horizons.

Swinging is great if you're in a committed relationship but don't like the idea of monogamy. While getting all the perks of a loving boyfriend or husband, you're also allowed to sexually experiment with other people, meaning there's less need to stray away.

Paradoxical perhaps, but swinging gives a structure to alternative sexual encounters which reportedly leads to a lower chance of you or your man playing away (after all, if your other half will let you sleep with who you want, maybe they're a keeper?)

As a concept though, swinging can be hard to get your head around, on the one hand you're in a relationship, but you're allowed to have sex with randoms, which doesn't come across as very committed...

Whether it's you or your partner who has introduced the idea of swinging, it's worth knowing what you're getting into before putting a date in the diary for your local swingers club night.

The practice of swinging started in Europe during the Second World War with soldiers sometimes taking part in "key parties" where men would mix up their keys and women would chose a key at random, and then sleep with the owner of the key.

Not to be confused with "sex communities" (which appeared in the 1970s), swinging advocates short-lived sexual relations within a group, and doesn't seek to challenge the notion of what it is to be a couple.

If you're free spirited, anti-conformist or generally a little bit cheeky, then swinging has a certain appeal and if you like watching, or being watched, swinging allows you to indulge your inner voyeur or exhibitionist.&

If you're gonna swing you have to be laid back and you have to have 'the trust.' It's a lot to ask of anyone to see you making out with someone else, or vice versa, so as a couple you should both only accept what feels right.

One of the main turn-on's about swinging is the element of watching another couple have sex. If you've ever done it in front of a mirror then you'll know what we're talking about!

There are of course endless possibilities when it comes to swinging but there are some terms you need to be au fait with before you accidently say yes to something you weren't expecting!

Soft swap: This is where a couple swaps partners and engages in kissing, caressing and touching, sometimes even oral sex.

Full swap: This refers to when couples swap partners and engage in full penetrative sex.

Barebacking: This is when a couple has penetrative sex without a condom - not a good idea.

Swinging: where to go?

If you want to swing then there are a few options as to where to go...

Nightclubs: Special swingers club nights are kitted out for the occasion, enabling participants to circulate easily from one area to another. They often have places that are set back from the usual dance floor or bar (rooms plunged into almost darkness with benches and carpets, saunas, showers, etc and of course plenty of condom dispensers!

At home: On a Saturday night, swap Strictly for Strictly Come Swinging, where things are more x-rated than X factor ... Some swingers prefer getting it on at each other's houses, in an atmosphere that's more relaxed.

Make your guests feel at ease by showing them round the house and offering them snacks and drinks. If you're the guest, you could bring them - we suggest wine! The main thing is for everyone to feel welcomed and comfortable.

Never force yourself into swapping your partner for someone else - you have to be comfortable with the encounters you're having.

Everyone has the right to accept or turn down sexual practices. It's completely fine to refuse someone, as long as you're tactful about it. Politeness is important amongst swingers... and don't just jump on the first couple you see!

As for the finer details, dress sexy if you like, and if you want to bring accessories, you're free to do so! But don't compromise on hygiene, take some sex toy cleansing wipes with you.

Risks for the couple

Swinging sometimes appears like adultery in disguise. Some couples say they practise swinging to break up their day-to-day routine. But it also allows them to prevent the risks of infidelity by "fighting fire with fire."

One of the partners can therefore feel hurt as a result of witnessing their partner's extra-marital sex live, even if their presence reassures them and gives them the impression that there are no secrets within their relationship.

What's more, swinging can make a person doubt their sexual "abilities" because of comparisons with other people e.g. "he's better at sex than I am", "he's got a bigger penis than me" for men, or "she's got nicer breasts" for women.

Seeing your partner get more aroused with one or more other people can also be disturbing for the couple and it can fuel jealousy.

There are no rules about how often you should practise swinging, it depends on how you and your partner feel. It could be a one-off just to try it, an annual tradition to spice things up, or all the time, if you're not satisfied having sex with just one partner.

#Sexual pleasure
From hair ideas to outifts, look no further for your daily inspiration