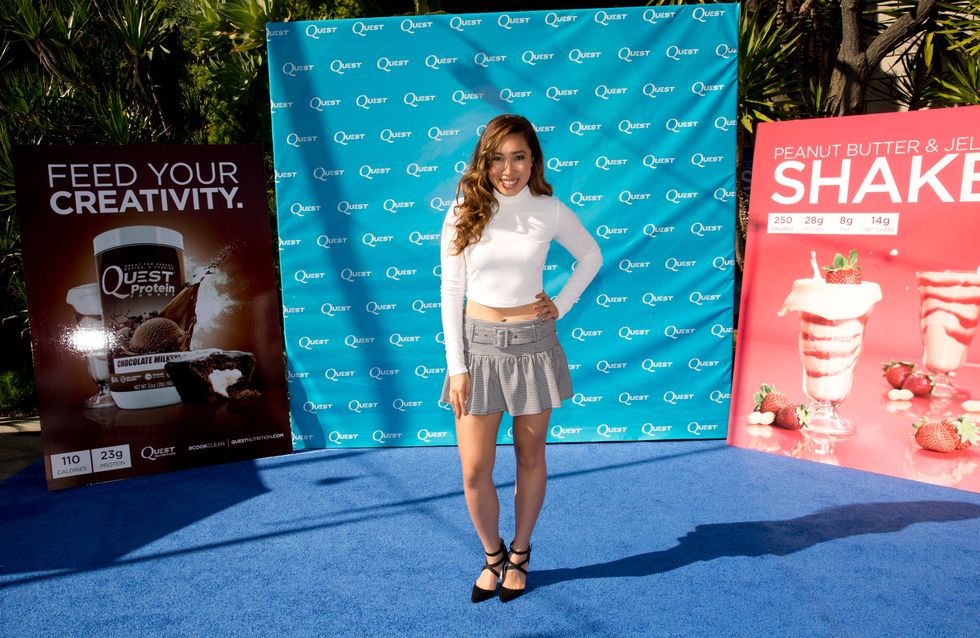 Beads of sweat are running down my face as I begin a set of single-leg bridges on the floor or my flat. One Direction's "What Makes You Beautiful" is playing in the background, and the pain shooting through my thighs and glutes is unbearable. Yet I push through the exhaustion and temptation to quit because a voice on the other side of my computer screen is telling me not to. That voice is coming from Blogilates founder and YouTube fitness guru Cassey Ho.

Though I hadn't discovered Ho's "What Makes You Bootyful Butt Challenge" until my college years, it's fair to say that after stumbling upon her work in 2012, I've had my arse kicked with almost every workout she's published since.

However, the California native has not only changed my life but has also impacted women across the nation since her first YouTube upload in 2009. As the founder of POP Pilates — the concept of meshing together both pop music and Pilates for an upbeat workout — Ho has made a name for herself in the world of health and fitness with over 2 million YouTube subscribers and over 170,000 Twitter followers.

A recent video of hers, The 'Perfect' Body went viral after she photoshopped herself to 'perfection' and proved that even fitness gurus like herself are a victims of cyber bullying and fat shaming, and it CAN really have an impact on the way you feel.

​So it's no wonder the she's widely recognised for her positive, can-do attitude and the uncanny ability to make even the most grueling routines seem entertaining and feel good! From the "Lower Belly Flattener" to her "Butt Lift & Slim Thighs" video, Ho manages to complete her intense workouts with a smile on her face the entire time.

Don't wish for it. WORK FOR IT. That's the difference between the talkers and the doers. Bee-tee-dubs, this is my new fave tank. Don't you love the ombré!?? It makes me so happy. www.shopblogilates.com

With all that she's accomplished thus far, it's difficult to imagine Ho ever being anything but the peppy, fit woman that she is today.​ Yet long before her fitness journey began, Ho was struggling with body image issues of her own when she was a child.

"I was bullied when I was younger because I was chubby and my last name was Ho," the fitness instructor says of her past. "I didn’t know what a 'ho' was so that was really messed up. I was also the smart kid, so I would always raise my hand and people thought it was annoying."

Noting how unpleasant the experience was and that she'll never forget it, Ho's childhood wasn't much different from that of many of her fans who endured the wrath of ​bullies during their pre-pubescent years.

"Sometimes kids are just mean and there’s no sense of being politically correct or questioning their words," Ho says. "It just is, and you have to learn how to be bigger and better from it."

Quoting Taylor Swift's song lyrics, "Cause, baby, I could build a castle out of all the bricks they threw at me," Ho admits that while the bullying was tough, she used it as a learning experience and grew from it. Eventually, Ho began to naturally thin out as she got older, and by 16 she was entering a beauty pageant and discovering new ways to get in shape. In fact, it was all thanks to an infomercial for a Mari Winsor Pilates DVD that she finally fell in love with Pilates and became inspired by workout videos. Just four years later, when she was in year 11 at Whittier College, Ho applied to a position as a Pilates instructor at a studio right down the street from her dorm.

Making a Change & Pursuing a Dream

That's no exaggeration. Initially attending university to use her biology degree toward a future in medicine, Ho's career path drastically changed after she launched oGorgeous during her final year of college, creating the Beverly Bowtie Yoga Bag, which was featured in SHAPE Magazine and "The Wendy Williams Show." After several months as a fashion buyer post-graduation, Ho later recognised her true calling for fitness and entrepreneurship, quitting her job to become a full-time Pilates instructor and continuing with her YouTube videos. Although both her decisions to be a fashion buyer and then to ultimately pursue a Pilates career was a point of contention with her parents who wanted her to be a doctor, Ho pursued her dream, creating the empire that she has today. Now her parents are fully supportive, and the attention she receives from her adoring fans just proves she made the right move.

"I first discovered Blogilates by searching on YouTube for workouts that I could do in my home, with little to no equipment," Sarah Grace Clark, a fellow POPster, says. "Once the YouTube videos led me to her blog, I was hooked. Not only does [Cassey] have amazing workout videos, but she has great recipes and meal plans to help girls get into shape."

It's feedback like this that keeps Ho going even during the worst of weeks. Despite what fans might believe after seeing how cheerful and optimistic she is in her videos, Ho has bad days just like the rest of us.

"It might be safe to say that this is one of the most intense weeks of my life so far," Ho said when I spoke with her. "I actually had a breakdown twice already."

Try this Sun Lunge stretch to open up your back, shoulders, chest and groin. Hold for 30 sec each side. It works wonders to get you not only more flexible...but to make you feel amazing! One of my favorite shoots from Hot Body Year Round! This is at the Bonneville Salt Flats in Utah. Can you believe that I'm on top of a whole inch of water trying to not get soaked?!? Yup. Photo by @davidkimphotography. www.hotbodybook.com #hotbodybook

Finding Motivation From Her POPsters

Certainly not the first time Ho ​has experienced the stress from all her responsibilities, she admits that she works hard, always pushing herself and even staying up until 4 a.m. some days to get everything done. With her Pilates classes, filming videos, attending meet ups, and everything else she has on her plate, the pressure can definitely get to her. After all, she's only human. Yet while she sometimes gets upset with herself for letting the chaos in her life escalate, Ho says that at the end of the day, she's so grateful for everything and would rather continue with the hectic life she leads than ever giving up Blogilates.

"It's the fans; I do everything for them," Ho says. "I really work to serve them, because they're the community. They're the ones who have pushed Blogilates to where it is and honestly it’s really fun and I'm living my dream. I get to work out, I get to work with really cool people, I get to be creative, and I get to design. Things that people thought I couldn’t do and I'm doing it."

And POPsters like myself are glad that she's part of our lives, even if she's across the country or the world. Thanks to her videos Ho just feels like a gym buddy simply motivating a friend (her fans) to push through the burn both in fitness and in life.

"It’s hard to beat Cassey’s bubbly personality," Clark says. "She's so full of encouragement that you really don’t want to let her down when you're working out. Even if other trainers were to use her fitness methods, you can't replicate her attitude and the way she really wants to be everyone’s personal trainer and mentor."

50 Quotes to Boost Your Body Confidence:

The 10 Best YouTube Tabata Workouts To Get Fit Fast

Follow us on Instagram!
You might also like
20 Books That Will Make You A Stronger Woman
by the editorial team
100 Quotes About Embracing Change
by the editorial team
by the editorial team
The Ultimate To Do List: 100 Things You Must Do Before You Die
by the editorial team
This Fitness Instagram Star Wants You To Stop Being So Self-critical
by Pascale Day
I Went To Therapy For A Year And This Is What I Learned
by Dagney Pruner
“I’m who I am; I don’t need a man!” Frozen’s Queen Elsa redefines generations of Disney Princesses
by the editorial team
Meet The Model Who Is Changing ALL The Rules: Here's What Beautiful Really Looks Like
by Cliche Wynter
Why Women Need To Stop Obsessing Over Having A Flat Stomach
by Helen Turnbull
I did that! How boasting can boost your career
by Vivian KELLY