It seems model Cara Delevingne has succumbed to the celeb craze of tattoos. The Burberry star has chosen a typically quirky lion design and though it's a bit odd, we're sure she'll carry it off with style!

Cara Delevingne has had her first tattoo inked onto her index finger.

The British model has had the design of a lion in black and white painted onto the lower part of her finger on her right hand.

Cara posted an image of her new body art on Twitter and wrote: "My first tattoo!! Lions rule! Thank you so much @BangBang badgalriri."

The 20-year-old later posted: "I am so happy! Thanks again @BangBang @elemags ! RAWWWW." 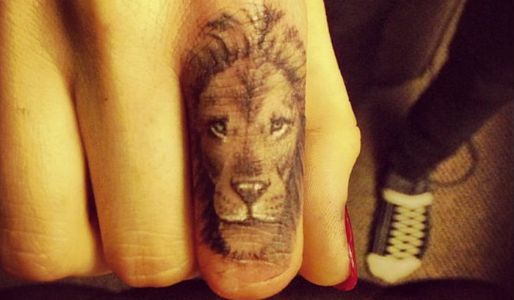 One wrote: "That's so bomb! but I know that sh*t hurt because fingers are mostly made of bone."

But some Twitter users weren't so sure about the new marking on the model's hand.

One tweeted: "Is it me or is @Caradelevingne's tattoo really rather grotesque? Maybe I am just not fashionable enough!" 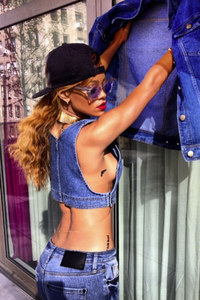 Rihanna - who has around 18 tattoos including a falcon on her ankle, a gun below her right armpit and the Egyptian Goddess Isis below her breasts - also tweeted a picture of Cara's tattoo.

The 25-year-old Bajan singer wrote: "My lover caradelevingne just came over and got tagged for the first time!! Only by the best @BangBang…"

Bang Bang has apparently done around 12 of RiRi's tattoos, while only last week he inked a bird onto the bottom of Rita Ora's neck.

Rita, 22, tweeted a picture of the finished work and wrote: "My new baby bird thank you @BangBang."

She then decided to repay the favour and give Bang Bang a matching bird tattoo - though the artistry left a lot to be desired.

She tweeted a snap and wrote: "His and hers! HA look at the difference... It's the once in a lifetime Rita Ora tattoo HA!" 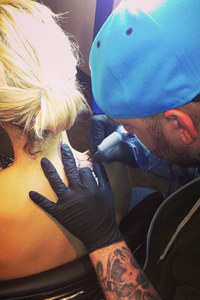