No sex for Robert Pattinson and Kristen Stewart?!

They may have shared some notoriously passionate scenes in Twilight, but it's reportedly far from getting hot and steamy at home for Robert Pattinson and Kristen Stewart. The couple are living with KStew's mum and it has apparently led to things cooling right down in the bedroom.

Robert Pattinson and Kristen Stewart are apparently going through a bit of a dry spell, with sex being taken off the menu of late.

The pair are currently living with Kristen's mother Jules - and it seems having mum around has done nothing for creating a romantic mood at home.

The Hollywood super couple have only recently reunited since spending time apart, while RPatz filmed his latest film in Australia.

We imagine they'd appreciate some alone time - no such luck.

The pair have been living at Jules' place to show her support since her split from Kristen's father John.

A source told The Sun: “They’re living with Jules because she’s going through a rough divorce from Kristen’s dad John." 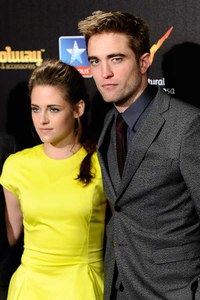 And so it's understandable that the young couple just don't feel comfortable getting intimate with Kristen's mum just down the hall.

The source added: “It’s having a bad effect on Rob and Kristen’s sex life, they’re too afraid to have any with her mum in the house.”

The choice to stay with Kristen's mother is difficult for them both, but Rob, 26, is reportedly finding it harder.

"He says Jules is driving him nuts and he can't take it. Living with Jules has all but killed their love life. Neither of them have any libido when Jules is around."

The Twilight pair appear to be getting back on track following their rocky patch last year, when Kristen, 23, confessed to cheating on Rob with her Snow With And the Huntsman director Rupert Sanders.

They have been spotted out on various loved-up dates and at all sorts of concerts, including Coachella.

This sounds like the last thing they need now things are finally good again!