Home / Health and Fitness / Diets / Happy World Vegan Day! I Went Vegan For A Week And This Is What I Learned

Happy World Vegan Day! I Went Vegan For A Week And This Is What I Learned

by Pascale Day Published on 30 December 2015 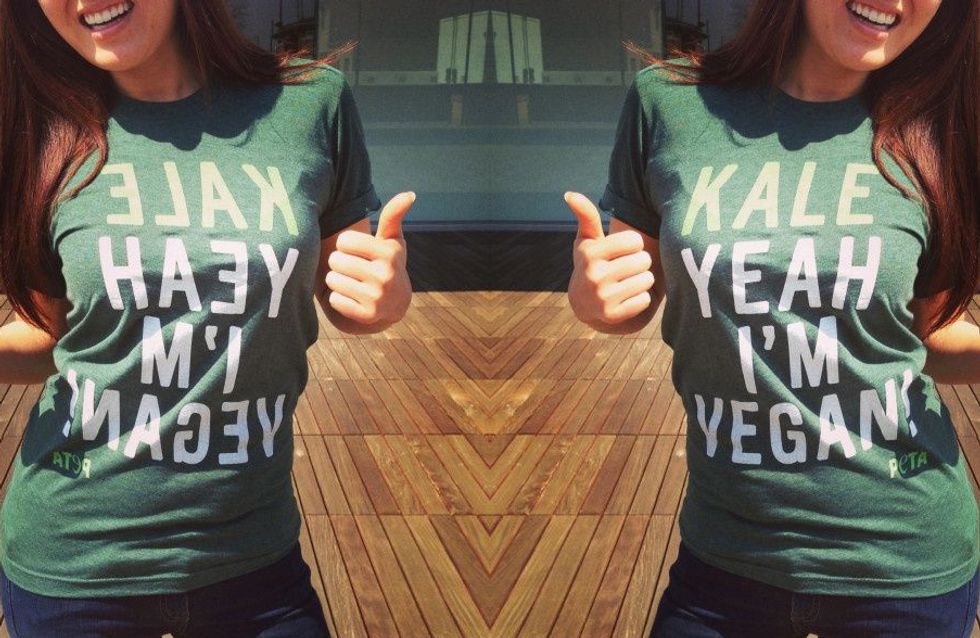 How can you go from meat-loving omnivore to dairy-free, gluten-free, hipster-loving, courgetti-eating vegan? Not easily, I can tell you that. No one likes vegans, but you don't know what they've been through until you've walked a mile in their (hemp) shoes. Here's five things I learnt from going vegan for one week.

Liam Hemsworth. Jared Leto. Beyonce. What do they all have in common? They're all crazy. And why are they crazy? Because they made the decision to become vegan. For life. That means all the time. And now I was joining them - just for a week mind you.

I know vegan means no dairy, but when they say you can't eat cheese, they're serious. That's a real thing, you can't eat it ever. And that, my friend, is a depressing life to live. I couldn't even walk past the cheese counter in Waitrose. You can eat vegan cheese, but vegan cheese is weird, so I steered clear. This was by far the hardest thing to give up on. Milk, eggs, cheese are the bases of so many of the best and calorific foods. You can't even eat cake. I'm being serious.

2. Some of the substitutes are actually delicious

And this shocked me. There were some foods, particularly the sweet stuff, that was kinda nice. Like, I would actually eat it now. Alpro Vanilla soy desserts were one of my standout favourites, which are made with soy rather than milk. It was just like eating small tubs of custard, and they were the highlight of my day. Seriously. It was a dark time. Their oat milk was also great in porridge in lieu of normal milk, but was not so great on its own, it just tasted too oaty for regular consumption. For a snack, I ate cashew nuts Perk!er bars, and although cashews are delicious, they are hella expensive. The best was Goji & Cranberry Quinoa Bar, which is pretty tasty once you get over the fact that you're eating quinoa as a sweet treat.

If you go to any other restaurant, a restaurant for any old regular joe, and you feel like just another person. But go into a vegan restaurant, and you're one of them. You feel welcomed. You feel accepted. You're part of a secret club. And when you eat vegan food at a vegan restaurant, it actually tastes good, because chefs who cater to vegan people actually know how to make something tasty, so it's actually edible, instead of too mushy or too hard or too bitter. Quinoa and sweet potato chunky chips are insane when done right.

5. You need to make sure you eat enough

Because you're cutting out so many food groups, you'll find you're eating much fewer calories than before. Also, the lack of meat means you won't be taking in as much iron and protein, so these need to be replaced. I ate Chia Bia's Chia Oil Capsules as a substitute for fish oil tablets, which contained Omega-3. But as I just kept up the veganism for a week, it wasn't so bad. I didn't really need to supplement. However, if I didn't eat enough, or didn't eat anything particularly substantial, I would start to feel slightly faint later in the afternoons. But what can be better than being told you need to eat more?! This was my favourite thing about the vegan diet: you get to eat a LOT. All the time. Because most of the stuff you're eating is so low in calories, you need to make sure you eat plenty of it. It's always been a dream of mine to be told I need to eat more (it never normally happens: it's usually more "slow down!" or "Jesus Christ, have you eaten the whole cake already?!) but that wasn't the case here, and it was glorious.

Having said that, that wasn't enough to keep me vegan for longer than a week. And YES, I'll admit it. I slipped up once or twice. Veganism is hard, man. It's not easy to keep your mind off of cheese when that's all you want, day and night and everything in between. So never was I so glad to see a big ol' slab of meat and cheese placed in front of me at the end of an emotional week. Being vegan isn't for the faint of heart. It takes real dedication. And if you can find that level of commitment, there are actually some really nice things to eat; you'll certainly find your favourites quickly. But for now, it's back to the meat for me. ​

Have you ever gone vegan? Let us know what you think! @sofeminineUK