by Lareese Craig Published on 24 October 2014

Imagine Audrey Hepburn only taller and with a delightfully charming bob and you've basically got Emma Ferrer. Life is unfair. We've accepted this. If you haven't heard of her before it's because she's been set on keeping a low profile, determined not to become a prodigy off the back of her grandma's legacy. But now after her first model debut with Harper's in the summer, she's back to show off her best fashion face. And it's pretty HOT.

Rarely can a woman measure up to the classic beauty of someone like Audrey Hepburn but when you're her actual granddaughter it's kind of already there in the genes (it's alright for some).

Despite never meeting her utterly gorgeous grandmother, it seems Emma Ferrer has inherited more than just her Ralph Lauren cashmere and waist-cinching skirts. Again, we're not jealous at all.

After being launched into the spotlight with her ode-to-Audrey spread for Harper's back in the summer, Emma's back with a bang for her latest modelling gig.

In a stunning Parisian photoshoot for Yahoo Style, the 20-year-old poses against the sunny Seine backdrop. Wearing Jil Sander, Chloe and Lanvin this time round was all about embracing the fashion of the here and now. Strictly no pearls allowed.

In one particularly sultry shot, Emma covers her modesty in a grey Sportmax blazer and slicked back hair while another sees her showing off this season's knit-dress trend. And may we just point out, THOSE GAMS.

Speaking of Audrey, Emma says: "She has this really warm energy and she’s joyful, happy, and playful. And she has certain mannerisms that I can connect with, for example this innocent look of surprise — a wide-eyed nature — she sometimes has. I see that in my little brother, too, and it makes me feel similar to her in a way, which is really nice."

The almond shaped eyes, the mouth that turns up at the corners, the killer cheekbones - while she may have never had the chance of meeting her G'ma it's plain to see she's a Hepburn at heart.

Our verdict? A fair lady indeed! 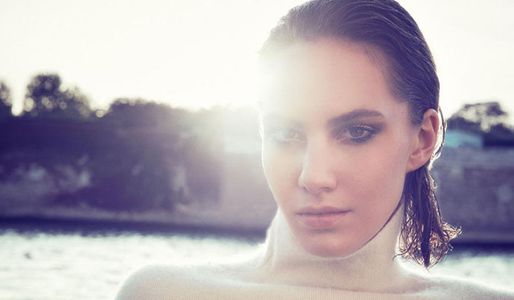 What do you think about Emma's photoshoot? A chip off the old block or nothing on Aud? Tweet us @sofeminineUK