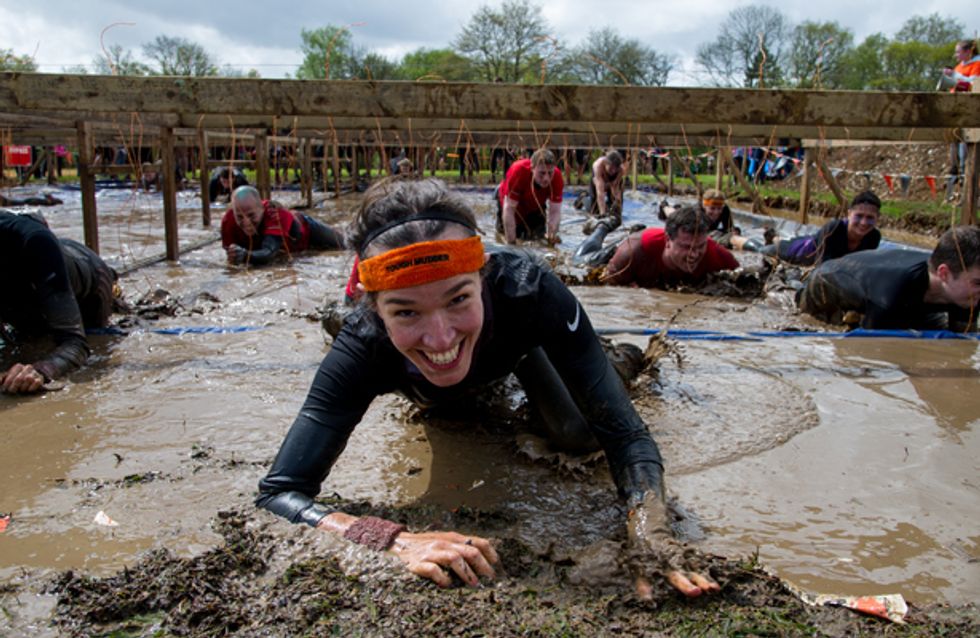 ​Ever fancied running through fields of mud for 12 miles? How about getting electrocuted and dunked in pools full of ice along the way? No? What's wrong with you! Forget running races or even triathlons - this year’s ‘it’ activity is the extreme obstacle course and it doesn't get more extreme than a Tough Mudder. Think you've got what it takes? Well you're about to find out.

For all of you who haven't heard of a Tough Mudder, it is basically hell on earth the greatest fitness challenge you will ever face. Over a course of 10-12 miles, teams of competitors have to climb, swing, run and duck through a potential 28 obstacles, including a wall of fire AND dangling live wires. Casual.

But don't worry, you're then rewarded with a cool pint of Ginger Grouse, an awesome after-party and the everlasting RESPECT of everyone you know.

For those looking to test their physical and mental strength this way, we spoke to Tough Mudder’s Chief Training Officer, Nigel Thomas, to get the low-down on the event. Having spent 14 years with the British Special Forces as a mountaineering specialist, he’s a total machine and knows the ins and outs of everything Tough Mudder, from the obstacle designs to the training programmes to follow.

Here is his inside take on what to expect – plus his tips taking on the challenge of getting down and dirty:

1. Tough Mudder is [stating the obvious]…tough!

We don't think we need to point out the obvious but just in case, you can't just waltz into a Tough Mudder and expect to be OK. As the self proclaimed 'toughest event on the planet', this event is the real deal.

"Designed by the Special Forces to test all-round strength, stamina, mental grit, and camaraderie, Tough Mudder has the most innovative courses that have inspired over a million participants worldwide to date," Nigel says. AKA this stuff is a challenge.

2. It's as much mental as it is physical

Completing a Tough Mudder is as much a mental achievement as it is physical. "Tough Mudder is more than an event – and more than just a fitness challenge. It’s a way of thinking. For a ‘Tough Mudder’, life is about pushing boundaries and overcoming all obstacles through teamwork—and having fun along the way," Nigel says.

Plus, have you LOOKED at this thing? You have to be at least half mental/machine to even attempt this (in the best way of course). But Nigel says that toughening yourself up mentally is almost inevitable.

"Knowing the fact that not everyone completed the challenge should spur you on to face your own demons/fears and promise that the sense of achievement you get when we put that orange headband on your head is a moment to savour," says Nigel.​

3. It's all about teamwork

Although you don't actually have to be in a set team to enter a Tough Mudder, the whole course is about teamwork.

Nigel says: "Mudders’ pledge to put teamwork and camaraderie before their course time, help their fellow ‘Mudders’ complete the course, and overcome all fears. It’s about pushing yourself to the limits and helping others to do the same.

"As such Tough Mudder is a set of core values to live by – both on course and in everyday life. When you take part in a Tough Mudder, you’ll meet new people and overcome challenges when you get through the course—together."

4. The obstacles are insane

Time to talk about those obstacles huh?

While we can't run you through every single one of them, just some of our favourites include a 'Cage Crawl', which sees you swim under 20 metres of cage with only a matter of inches on top for breathing room. There's also obstacles that see you scale a tiny wall ledge using just your grip and finger strength, monkey bars, hero walls, log carrying, and crawling through a smoke-ridden shoot finishing with a 1.2 metre wall of fire for you to jump over.

Nigel says, "I love to watch the Artic Enema in which participants bravely swim through ice-laden waters and under a wooden plank before reaching the other side. Sponsored by our Pint Partners, Ginger Grouse, Artic Enema can take the most mental grit of them all. We recommend that you don’t over think it and climb straight into the ice bath! It also takes a while to warm up once you get out – just start running."

​But that's not all. Nigel explains that "Electro Shock Therapy, the last obstacle, is also a great one and it does actually scare a lot of participants as they need to run through a field of live wires. Each person feels the shock, but for some the shock comes as a big hit." No kidding.

5. You have to sign a death waiver to take part

Nigel knows first-hand that the course can be a matter of life or death. "When I mentioned it was tough I meant it. Only 75% of participants actually complete the course," he explains. That doesn't mean that the other 25% die - thank goodness.

"​Don’t let that put you off though. We have a comprehensive team of onsite medical experts, doctors and first aiders/volunteers on hand to ensure the safety of all our participants and spectators while they are at Tough Mudder", he continues. Phew.

6. Anyone can take part

From everything we've just said, it might not sound like this is open to everyone, but Nigel assures us that it is.
​
"I am training a team of ladies of all shapes and sizes for the August event. They started with a simple program of ten exercises once a day for ten weeks before we started to build the tempo. They would also walk, jog, swim, Zumba or whatever they enjoyed doing during this period," Nigel says. "Ten weeks on and they are jogging five miles through hilly, sandy and muddy terrain and every three minutes they are doing body exercises. Their confidence is growing, their bodies are changing (for the better) and they now want to train harder and for longer periods."

It's all in the training. If you get your training right, Nigel says that almost anyone can participate. If you're wondering where the heck to start, Nigel recommends the "body circuits and the ones we have on the TM website; they are not easy but if they were easy everyone would be doing them."

Remember you can do this as part of a team anyway, so having someone else to share the ups and downs with will make training a lot easier.

Above all else, a Tough Mudder is one hell of a laugh. Pushing yourself to your total limits whilst covered in mud with a team of your friends has got to be up there with one of the best experiences.

"We add new obstacles to the course every year and​ test them for difficulty, fun and of course safety and then put a name to them. You can rest assured that the obstacles have been designed to the highest standard so no need to worry about that on the day," Nigel explains.

Plus, any obstacle course that ends with a pint full of Ginger Grouse and a huge party sounds like something worth getting involved in.

8. There are SECRET obstacles for veteran Mudders

A race with secret obstacles? Does it get more awesome than that? Nigel says that after "completing two or more Tough Mudder makes you part of the ‘Mudder Legion’ – a community which gives you exclusive access to special secret obstacles at the events as well as different colour headbands showcasing your rank."

What is it about being in a secret society that sounds so appealing? ​

In addition to the obstacle course itself Tough Mudder also incorporates Mudder Fest – a weekend-long extravaganza of onsite camping and after-party action. In addition, there will be a number of contests, games and activities to finish off the unforgettable experience.

10. It supports Help For Heroes

Since 2012, Tough Mudder has proudly supported Help for Heroes by offering participants a discount on their entry if they raise £120 or over for the charity.

Nigel says: "​Everyone is encouraged to donate directly either via the Tough Mudder website or at Tough Mudder events. Funds are used on projects that support veterans, their families and serving wounded, injured and sick as they recover and return to the Forces or transition to civilian life. Help is given to those in need, regardless of when and where they were injured, whether they are serving or veterans."

There are several Tough Mudder events taking place up and down the UK in 2014. To enter visit their website.

Tweet us at @sofeminineUK (if you're mad enough to do one) and tell us how it went!

25 Reasons Running Is The Ultimate Workout

Quit The Excuses! 50 Motivational Fitness Quotes To Get Your Ass Up And In Shape

Want To Get Fit For Summer? 18 Reasons Why Barry's Boot Camp Is The Ultimate Workout