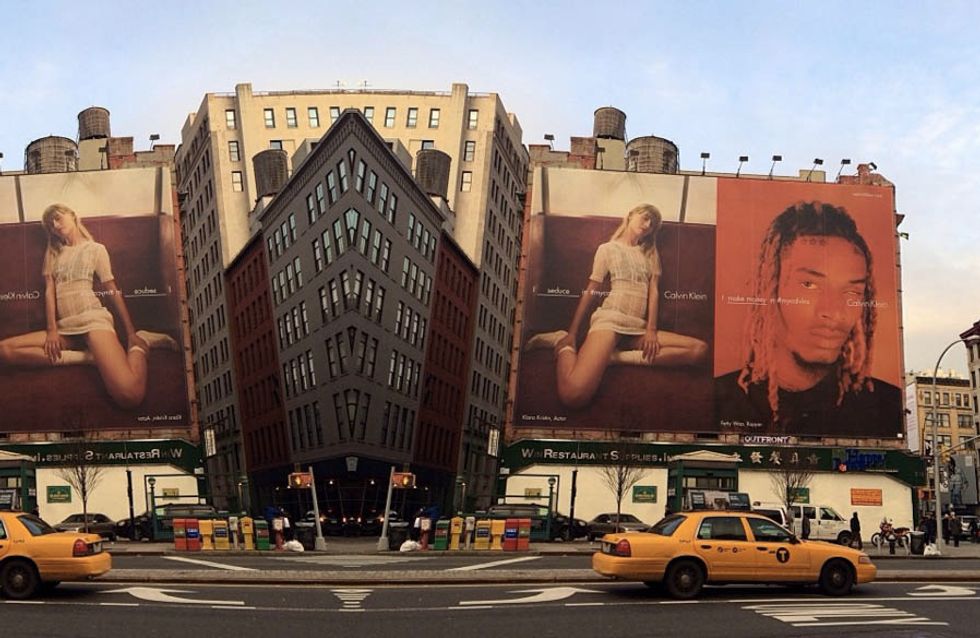 Calvin Klein have come under fire for their latest #mycalvins ad after it had been said that their main New York billboard seemed to perpetuate outdated gender stereotypes, which we're totally bored of RN. The campaign features some of our favourite musicians and artists in their tighty whiteys, including Justin Bieber, Kendrick Lamar and Kendall Jenner, but has fallen slightly out of favour after this latest hiccup.

Uh oh. Calvin Klein is in trouble once again.

The fashion powerhouse's #mycalvins campaign features the likes of Justin Bieber, Kendall Jenner and FKA Twigs stripped down to their undercrackers, and aims to show what these gorgeous celebs do in their spare time whilst wearing their branded undies - for instance, Justin 'flaunts' in his (don't we just know it), whilst rapper Kendrick Lamar 'reflects' in his.

I flaunt in #mycalvins. Introducing the @CalvinKlein spring 2016 campaign

I reflect in #mycalvins @calvinklein

Melisa Goldie, CMO of Calvin Klein said "This campaign is representative of how culture is evolving as we speak. We're bringing together a diverse mix of provocateurs with a unique collective of visual artists to create content that sparks and drives cultural conversation. Millennials reject labels when it comes to their own identities"

However, the campaign shot by photographer Tyrone Lebon is now coming under fire for a certain billboard in New York City, because after Ms Goldie's speech, this ad seems slightly contradictory to what she had said, particularly the bit about labels....

In case it wasn't clear, people are kind of upset about the wording and imagery portrayed in these two ads, a problem that is exacerbated when you place them side by side. The left side shows an almost up-the-skirt photograph of actress Klara Kristin with the words "I seduce in #mycalvins," whilst the right image shows rapper Fetty Wap in a portrait picture with the words, "I make money in #mycalvins."

"[The poster] highlights a dated gender stereotype that men are the bread-winners while women are sex objects," said Heidi Zak, CEO of lingerie brand ThirdLove, in a video attacking the campaign. It also shows people's reactions to the billboard:

Since then, Calvin Klein have sent a statement to Racked stating that the billboard has been taken down overnight, but that is was part of their spring/summer advertising rotation, not because of the backlash:

"This billboard was taken down overnight as part of the planned rotation of our Spring 2016 advertising campaign. We take all of our consumers’ concerns seriously and as a global brand, we promote gender equality and the breakdown of gender stereotypes across the world. Our global advertising campaign images feature many different musicians, artists and models wearing all of our product categories, including our underwear products, sharing how they feel about and live in their Calvins.​"

This is not the first time Calvin Klein has been in trouble for one of their advertising campaigns: in the 1980s the brand came under fire for featuring a 15 year old Brooke Shields in an advert where she asks "Do you want to know what comes between me and my Calvins? Nothing!" They were in trouble once again in 2014 after using Myla Dalbesio in their 'Perfectly Fit' campaign as a plus-sized model, although they never used that term in the ad. However, they were previously praised in 2015 for featuring the first same-sex couple on a New York billboard for Calvn Klein.

What do you make of Calvin Klein's new ad? Let us know! @sofeminineUK