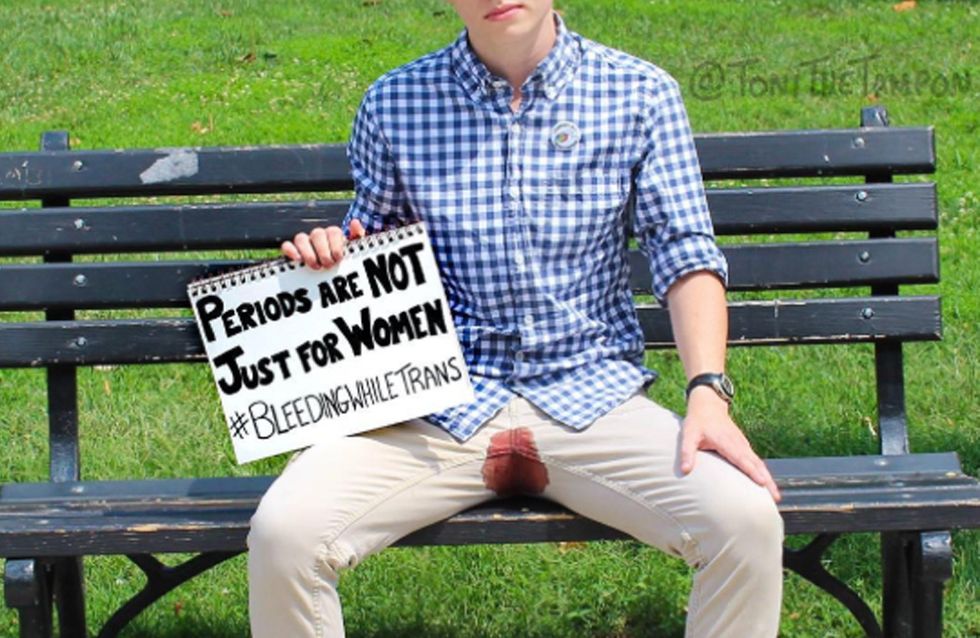 Being caught off guard and bleeding through your clothes when you're on your period and in public is a nightmare situation most women pray they never have to endure. But one period-positive activist has bled freely through their lightly-coloured chinos, legs spread and on a public park bench in the hope of spreading the message that periods aren't just for women, although basic biology begs to differ.

Cassie Clemmer is a transgender artist who doesn't conform to one gender and instead chooses to use their/they're pronouns in place of he/him and she/her. The Washington DC native is a period-positive activist and while their previous work - they're the brains behind artistic project Toni the Tampon - delighted the masses, their latest stunt has provoked a mass online debate.

Clemmer has been pictured deliberately bleeding through their trousers, legs spread, sitting on a park bench. They hold a sign up which reads: "Periods are not just for women. #Bleedingwhiletrans" - a message which has unsurprisingly angered many people, men and women alike. Alongside the controversial image, Clemmer posted a poem which detailed the struggles of being a trans who bleeds as well as the following hashtags: "#bleedingwhiletrans #menstruator #genderinclusion #mencanmenstruate #protectranskids #periodpride #genderdysphoria #menstruationmatters #ifmenhadperiods."

Y’all know I’m trans and queer, And what that means for me all around, Is something that’s neither there nor here, It’s a happy, scary middle ground. So when I talk gender inclusion, And I wrote these rhymes to help you see, I’m not tryna bring up something shallow, Periods are honestly pretty traumatic for me. See my life is very clearly marked, Like a red border cut up a nation, A time before and a time beyond, The mark of my first menstruation. So let me take you back, To the details that I can still recall, Of the day I gained my first period, And the day that I lost it all. I was 15 and still happy, Running around, all chest bared and buck, Climbing trees, digging holes, And no one gave a single fuck. I mean I think my ma was worried, So I went and grew out my locks, A sign I was normal, still a girl, A painted neon sign for my gender box. So, the day I got my period, My god, a day so proud, This little andro fucked up kid, Had been bestowed the straight, cis shroud. The relief got all meshed up in my pain, In that moment, I sat down and cried, Just thanking god I was normal, While mourning the freedom that had died. Everyone told me my hips would grow, I looked at them and couldn't stop crying, "What's wrong with you? You'll be a woman!" They kept celebrating a child dying. See my body had betrayed me, That red dot, the wax seal, On a contract left there broken, A gender identity that wasn’t real. Most people deal with blood and tissue, And yet my body forces me to surrender, Cause every time I get my cycle, Is another day I shed my gender. My boobs betray me first, I feel them stretching out my binder, I send up questions, "am I cursed?" And wish to god that she was kinder. The five days it flows, I try to breathe, I dissociate, While my body rips outs parts of me, Leaving nothing but a shell of hate. The blood drips from an open wound, Of a war waging deep inside my corpse, The battle between mind and body, Immovable object; unstoppable force. #bleedingwhiletrans #menstruator #genderinclusion #mencanmenstruate #protectranskids #periodpride #genderdysphoria #menstruationmatters #ifmenhadperiods [PLEASE SHARE!]

The photo provoked a fiery debate in the comments section with many expressing their disgust at seeing period blood - a totally natural and very vital part of life - while others heaped support on Clemmer while trying to explain their argument for why your genitalia doesn't determine your gender. "Genitalia doesn't determinate your gender, so it is your brain what determinates it. He hadn't a choice about being a man, because he always had been a man. And there's no thing about "scientific gender". Trans people usually, to be able to take hormones, they need to take psychological analysis to see if they have dysphoria (serious depression that can leak to thoughts of suicide). Because of dysphoria and because of this cisheteronormative society so many transgender kids had committed suicide. So no, this is not a game. This is not a whim. This is not something you can change or you can decide."

To the Trolls: Do y'all really think that hundreds of thousands of transphobic comments, e-mails, messages, and threats of violence from random people on the internet is going to stop me from being who I am and fighting for gender inclusion within the menstrual health movement? Hun, I've spent years getting to where I am now and, believe me, I've survived much worse. ?? #fuckthetrolls #shakeitoff #proudqueer #transboi #nonbinary #genderisaperformance #nomoregenderbinary #protecttranskids #queerlife #transmasculine #gingerqueer

"This post is hope for the future! This is SO POWERFUL! I am SO proud of our fearless youth charging the way to a more loving and inclusive tomorrow!!!!," another added. But for every positive comment, there were 100 negative and downright nasty ones, with some even being so sick as to tell Clemmer to kill himself. "Men cannot have fucking periods. You are everything that is wrong with the fucking world, seriously. THERE IS NO SUCH THING AS A MALE HUMAN BEING HAVING A DAMN PERIOD. It's literally scientifically impossible, any person with a slight bit of intelligence will tell you that. Silly fucker," one wrote.

Whatever your opinion on this controversial topic, we reckon we should all get on living our best lives and allow everyone around us to, don't you agree? Let us know your thoughts @soFeminineUK