by Pascale Day Published on 8 March 2016 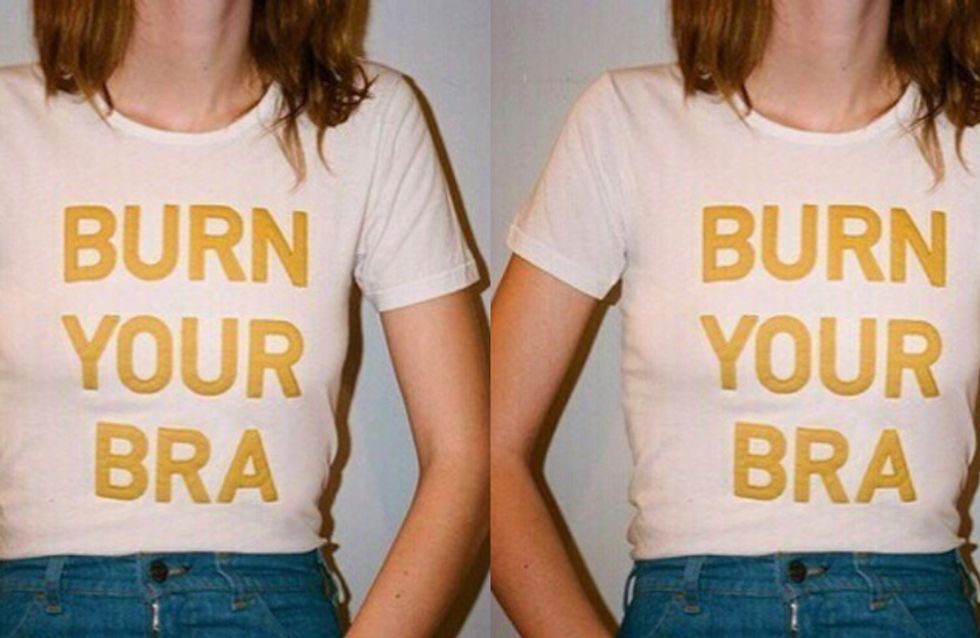 Today is International Women's Day. It's a day to celebrate women, our achievements, and everything we stand for. It's about standing up for feminism. But what is feminism, what makes a feminist and how can I become one? I was about to find out, thanks to my good friend WikiHow.

Feminism is hard, man. Women support it, then don't support it. There are so many caveats to how it works, it's basically like an iPhone contract. It's complicated and messy, and sometimes you end up just giving up on it. Am I supposed to enjoy compliments about my makeup or not?! Argggh I just don't know!

Being a good feminist is something we all strive for, but how are we supposed to know once we've made it? Is there a bit at the bottom of one of those catalogues you get through the post, where you fill it out and send it off to get a certificate with a special watermark to prove its authenticity? Do I get an extra letters after my names, and if so can I get my driver's license and debit card amended to say 'Miss Pascale Day, Feminist'. I just don't know. I guess it's just one of those things, like turning 21 and feeling no different when the clock strikes midnight.

I did a bit of research. Turns out, there is a set number of things you can do to become a good feminist, according to slacker bible, WikiHow. For those who don't know WikiHow, it's pretty much the holy grail for idiots to learn stuff like 'How To Care For An Obese Relative' or 'How To Fill a Salt and Pepper Shaker'. I always thought I was a feminist anyway, I've written about it before, but according to WikiHow I have nowhere NEAR completed enough tasks to get my feminist badge. I couldn't possibly go into my 26th International Women's Day being a phoney feminist, so I have committed myself to completing this WikiHow bucket list of women's rights.

Step One: Love Yourself

'...if you are a woman, loving yourself and practicing self-care empowers you. When you love yourself, you are essentially saying “my humanity matters.”' Wise words from the good people at WikiHow. Luckily, I've got a lot of love to give myself, so it's handy to nip step one in the bud straight away, because I only discovered this list one day before IWD and I don't have a lot of time. So step one: check.

If WikiHow have somehow assumed I'm in a heterosexual relationship, they assumed right: "As long as you’re making decisions about responsibilities based on choice and personal preference, and not on gender stereotypes, you’ll be incorporating feminism into your lifestyle." I mean, I like cooking. It means I get to divvy up a larger portion for myself. I'm not giving up that sweet job. I insist my partner takes out the bins because there's always foxes having sex near the designated bin area outside my building and they get very angry when disturbed, as we all do. Am I stereotyping him by making him take out the bins? He also bleeds the radiator sometimes... Should I be bleeding the radiator? Maybe I'll do that tomorrow. I don't know how to do it or if the radiators need it but I'm sure there's a WikiHow article on it.

Step Three: Raise your children to believe in gender equality

I don't have any children, and I don't really know any children. But, I do have an old friend who has had a little girl, so I messaged her in order to impart some feminist wisdom on her offspring, because you're never too young to learn important gender equality statistics, even at 3 years old:

This one's super easy for me, because there's only one man in the SoFem office. He's not really the discriminating type but believe me, he knows that gender discrimination will just not fly in an office of around 20 women. The SoFem team itself is relatively small, so I spent the afternoon forcing more gender inequality statistics on my two editors, much like I did with three-year-old Ella:

I did not receive any reply, probably because they have actual work to do.

"To be a feminist, support and empower other women instead of judging them." I mean, I don't work in a big office, so I get back in contact with my two editors to let them know I appreciated them as women and to give them each an uplifting compliment...

... Of which received very different replies....

"An important part of being an informed feminist is cultivating an awareness of systemic prejudices against women around the world. You can notice trends such as the discrepancy between the percentage of politicians or world leaders who are female, versus the female population of the world." DONE - I wrote a piece that highlights how, globally, women are still struggling to get into power jobs. Phew! I am totally bossing this feminist thing! If this was a class I'd be the student with all the gold stars that everyone hates but secretly wants to be! Which is good because I only have 12 hours to become the feminist WikiHow wants me to be.

"Go to rallies that promote women’s equality." Aw, man! I literally missed a rally at the weekend. I KNEW there would be something better to do than watching Parks and Rec on Netflix and eating danish pastries in my pants. Luckily, now that I know this is what I need to do I can keep an eye out on rallies near me. I always like making sassy, pun-tastic signs, so I'm definitely in. To suffice in the meantime, I sent a statistic to the guy working in our office - that'll have to do for now.

I did not receive a reply.

Woah woah woah, hold on. That's what I came here for? I thought WikiHow was going to teach me about feminism? I mean I have learned a lot: I need to bleed the radiator more, and you can get kids into feminism even at any age as long as it means they can watch Paw Patrol afterwards. What else was there to know?! How was I going to learn all this stuff in a day? Should I find ANOTHER 'How To Be A Feminist' article to help with Part Three of this feminist article? I was going to go to the gym after work! Luckily according to my Google search "If I've read a Nora Ephron book does that mean I'm a feminist?", I already am well on my way to became a stone-cold women's rights advocate, so I'm good. Plus, I watch basically everything Lena Dunham makes, so we cool.

Sure feminists don't HAVE to remain unmarried, hate men or be lesbians, but you can​ if you want to. Jeez. I was pretty sure feminism taught us that, as women, we can be anything we want. I mean, don't let this article tell you you can't be a furious, short haired, unwed, aggressive homosexual woman. You can be what you want, girlfriend!

There's also a common misconception that feminists burn their bras but I think this might be a misconception of a misconception. I think most people don't realise how flammable bras are. It's all synthetic material and padding. It's basically boob kindling. Anyone who has ever bought a nice balconette from Victoria's Secret knows that one does not simply "set their bra on fire". They're super expensive. Do you think Mrs Doubtfire was a feminazi because she burnt HER bra? No! She just leant in too close to her hollandaise sauce!

Step Three: Study the history of the feminist movement

"To really understand feminism, you may want to brush up on the different waves of the feminist movement." Hey, man. I know some stuff. I know who Emily Pankhurst is. I've read a Gloria Steinem book. Roe V Wade? Big deal, bro! Spice Girls. Voting. Riot Grrrl. BEYONCE. Slut walks. Dayuuuum son, I've pretty much got this feminist shizzle DOWN.

And so with that, I reach the end of my feminist journey. It's been emotional, but can enter this International Women's Day knowing that without a doubt I have officially made it as a real feminist, thanks to the good people at WikiHow and my own strong will. And it only took like, 4 hours! Unfortunately, once I reached the end there was no form to fill out and send off to secure some kind of certificate (what's the point in doing anything if you don't get a certificate?), so I made myself this badge:

To become a stone cold feminist like me, go to WikiHow's How To Be A Feminist article. There's pretty much no other way to do it.

Are you supporting feminism this International Women's Day? Let us know! @sofeminineUK

​​​10 Black Women Who Have Changed History