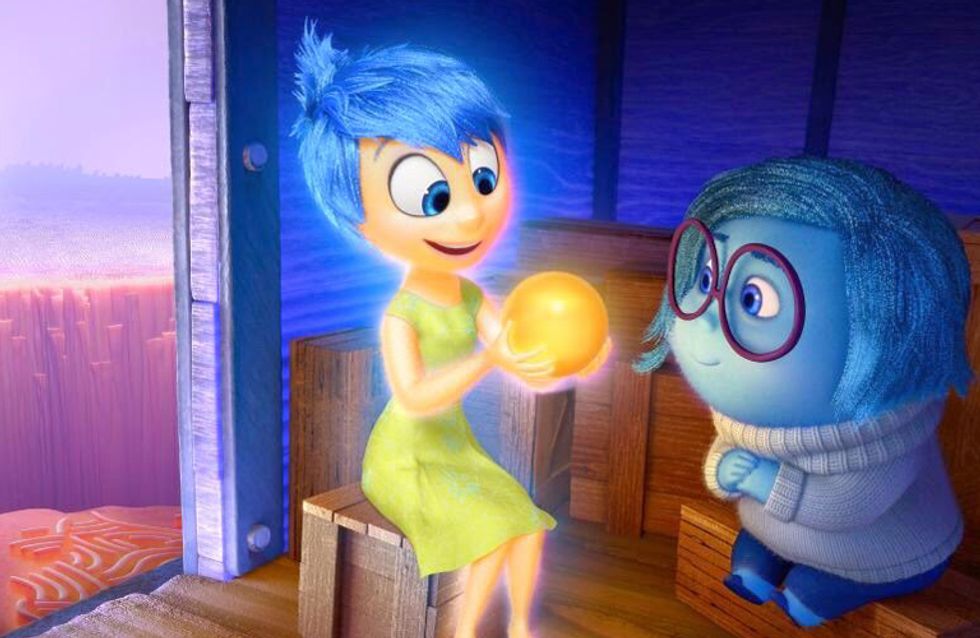 We're not saying you might cry at Pixar's newest movie, Inside Out. We're guaranteeing it. By the end, you'll be attempting to stem your tears so as not attract your friends/children/coworkers to your swollen face and heart. But we're not saying this is a bad thing. A great movie pulls at your emotions, and since this movie is about emotions, we think it's fair to say that it's creators knew their subject matter.

We went along to the Inside Out Press Conference to chat to producer Jonas Rivera, co-writer/director Pete Docter and the voice of Joy, Amy Poehler, to talk about the film that didn't leave a dry eye in the house. Here's why Pixar's newest creation is simply wonderful...

1. It's meant for adults and children alike

Children will love it, because it's funny and it's clever with plenty of action and ridiculous characters and although it's easy enough to follow, it also isn't dumbed down. Adults will love it because it handles surprisingly poignant subject matter beautifully and will reminisce about their own childhood, guaranteed.

Pete Docter said: "There's that period of childhood where everything is possible. There's still a bubble around you, an innocence..talking about the loss of that felt very important...we wanted to put joy in the drivers seat which made it all the more tragic when adulthood happens."

2. The storyline is great

Riley has had a wonderful childhood, and so the emotion Joy is the main part of Riley's life. Her longterm memories are all happy ones, and Joy is predominantly in control of Riley's emotions.

However, when Riley moves from her hometown Minnesota to San Francisco and subsequently struggles with her new home and school life, Joy struggles to regain control as Sadness gets involved. The two of them accidentally get lost and need to find their way back to the control room of Riley's mind. As they make their way through Riley's imagination, subconscious and dreams, the remaining Emotions Anger, Disgust and Fear are left behind to run the show.

3. It is visually stunning

It is honestly a work of genius. From the 'real world' where everything is slightly dull to the world of Riley's mind, which is vibrant and glittering and filled with places such as 'Abstract Thought' and the 'Memory Dump', the contrast and the scope of imagination that must have been involved is wonderful.

4. It is a serious emotional roller coaster

You'll laugh, you'll cry. You'll mostly cry. But then you'll laugh again! Just be sure to wear waterproof mascara so you can laugh heartily at everyone else's hysterical panda eyes on the way out.

5. It is probably Pixar's most complex movie yet

Although the film follows the eleven-year-old Riley, she isn't the main character. The Emotions, and especially Joy, are the main characters, whereas Riley is as Pete Docter said: "the vehicle and the setting."

This is no simple adventure of good and evil, right and wrong, and the fact that Sadness is a crucial part of saving the day seems almost too complex for a children's movie. It seems a little mad to tell a child that sadness can help when their sole purpose is to be happy, right? To sum up, it's deep stuff.

Joy isn't possible all of the time and sometimes sadness can help you more than you know. When talking about which are her main emotions, Amy Poehler said: "It’s always a nice reminder that sadness can be your friend and it can help you and I think about that when I’m feeling conflicted…disgust and fear probably paid a bigger part of my life when I was younger. I look forward to them coming back in my sixties."

It's seriously smart and intuitive, but also hilarious. With Amy Poehler at the helm, who plays the main character Joy, the improv in the recording studio came thick and fast. Pete Docter said: "Amy’s also so amazingly quick-witted that anything we put in front of [her], [she'd] do it as it was written then [she'd] start going off on a bunch of different directions too. The tough job was ‘ok, which of these 18 funny movies do we put in the movie?’"

8. The characters are perfection

The bratty yet immaculately dressed Disgust, the justice-seeking red dot of fury Anger, the spindly and worrying Fear, the dumpy yet loveable Sadness and the Tinker Bell ball of energy Joy are the perfect blend emotions especially since, according to writer Pete Docter, they started out with 27 characters. He told us about a few who didn't quite make it: "We had Hope. Hope was always running around going ‘ooo I hope there’s this and that!', and that’s why we cut her.

"We had Schadenfreude, he wore lederhosen and when people fell down he would say: 'hahaha your cries of pain amuse me'. So we experimented with a bunch of stuff but at the end we thought we need to know who everybody is and how to keep track of them, so [we cut] anyone who was superfluous and especially anyone who steps on Joy’s stuff – that’s why we got rid of Pride and Hope because they were starting to work in the same turf as we needed Joy to be."

9. You may understand yourself and your kids better afterwards

If you have children, you might be able to use the movie as a way to having them express their feelings and you might just learn something about your own thought process.

Amy Poehler said about her own experience watching the movie with her sons: "it’s really interesting to watch them figure out how they feel and they often don’t know how to express it. What I love about the film is that it gives children tools and ways to talk about how they’re feeling which isn’t the direct ‘how are you feeling’. My boys [and I] talk about anger as a funny character and then I’ll use that like ‘isn’t it funny how when you get angry you don’t listen?’"

As the founder of Smart Girls, a site aimed towards young girls to encourage them to be themselves, putting Amy Poehler as the main character in the head of an eleven-year-old girl was a perfect move. Not only does she absolutely smash it as the ever-optimistic Joy, her message and what she wants young people to take from the movie is essential.

​She said: "I did really want Joy to be a fully realised character and...her enthusiasm and exuberance is very much what you want for young women. Just unbridled energy and…she’s not self-conscious and she’s not very concerned with what people think of her and it’s super refreshing...So I loved her for that and I loved playing with her for that."

Are you planning to watch the film? Tweet us @sofeminineUK!