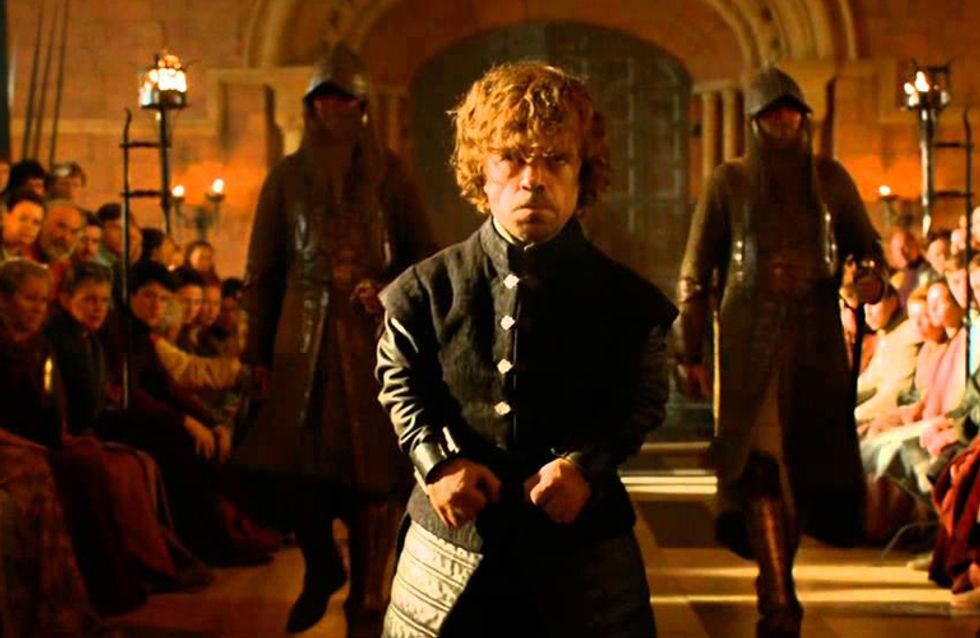 Game of Thrones has been absent from our lives for a good few months now, and we still have a while to go before season 5 picks back up in April 2015. However, it doesn't mean it's out of our hearts and minds. In fact...it's kind of taken over. Here are all the signs that you're missing Game of Thrones more than you'd care to admit...

1. You try to pay the Iron Price for things

Then you demand a trial by combat when you're arrested. Obviously.

That, and Jaime's epic: "Has anyone ever told you you're as boring as you are ugly?" are both top scorers in getting your point across.

3. You’re truly looking forward to celebrating your next name day

4. You consider ‘Valar Morghulis’ to be an acceptable method of greeting

And if they respond with 'Valar Dohaeris' you'll know they are feeling the keen loss of Game of Thrones just as badly as you are!

5. You spend your time poring over any details you can lay your hands on

Inside HBO’s Game of Thrones: Seasons 3 & 4 is a good start. We need details. Copious details.

6. You spend most of the time learning the history of Westeros rather than actual history

We couldn't tell you the names of every British King and Queen, but we could tell you all about the line of succession in GoT, no problem.

7. You begin to rate things differently

We've paid the iron price for some of our mistakes...

On a scale from 1 to Sansa Stark, how much do you regret your childhood crush?

8. ​When you refer to redheads as ‘kissed by fire’

It's much nicer than being called ginger anyway!

9. When you patronise your friends with: “oh my sweet Summer child”

What do they know about winter? They know nothing (Jon Snow) etc etc.

10. You’re constantly on edge that your favourite character in anything will be snatched from you

Game of Thrones has officially made it so no character in anything is safe anymore. Thanks, George RR Martin.

Unless you're one of those Lord of Light hippies. In which place GTFO.

12. When you say any statement and follow it with ‘it is known’

It is known that you do this.

13. You need to win at EVERYTHING

In the game of Connect 4 you win or you die. There is no middle ground.

14. When you have an animal named after one of the Stark pets

Or a couple of hamsters. Or goldfish. Either way, if at least one isn't called Ghost, you've failed as a fan.

15. When no one dies at a wedding and you feel cheated

Watching your great Aunt get hammered and the married couple dance to Adele was NOT your idea of what happened at a wedding. Not a single member of that band has a crossbow!

16. You get excited for cold weather just so you can say ‘Winter is coming’

17. If you can’t eat lemon cakes with thinking about how much Sansa would love them

Girl can eat some lemon cakes.

18. You start trying to warg into animals

19. When you shamelessly sing the Rains of Castamere

Bonus points if you know all the words!

Ever been emotionally destroyed by Game of Thrones?! Tweet us @sofeminineUK

Upcoming Game of Thrones Moments That Will Break The Internet