21 Celebrity Couples We Wish Were Dating

by Dagney Pruner Published on 10 February 2015 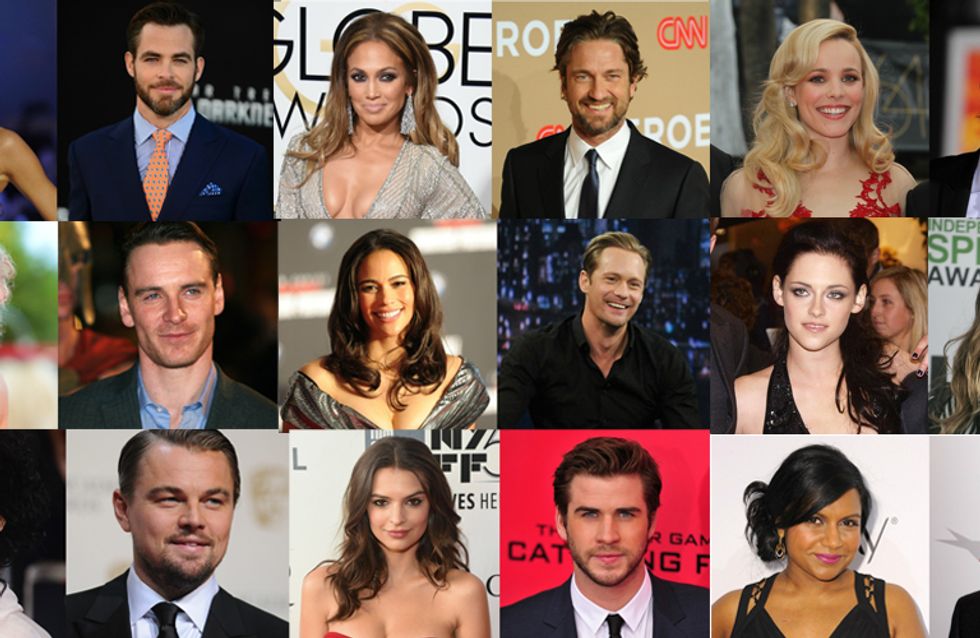 It feels like celebrities are forever hooking up and breaking up faster than you can Google "Is Jamie Dornan married?" So we think it's only appropriate that we get to add in our two cents of who we think should end up together. If we got to live in la-la land here are 20 couples we think would end up happily/hotly ever after.

Given that T Swift and Loki both have VERY serious fan bases we think it would only be fitting to see the two of them hook up. Taylor has a history of picking very high profile men (cough, Jake Gyllenhaal, Harry Styles, John Mayer, cough) so we think Tom Hiddleston and his ability to stay out of the tabloids is a perfect fit for the pop queen.

You may not know this, but Katy Perry started out as a Christian rock star with a very religious background. Russell Wilson is also a religious man and has also experienced heartbreak after his ex-wife cheated on him with a teammate. Given that Russell Brand didn't quite work out we think Russell 2.0 would be a huge upgrade.

This would be a British power couple of the ages. Prince Harry is known for loving a good party and so does Rita Ora. We don't know if the PR team at Buckingham Palace or Queen Elizabeth would be too thrilled, but the British tabloids would absolutely love it. Also their babies would be beautiful.

Rumor has it these two hooked up at a birthday party at the Playboy mansion recently and she's allegedly even convinced him to go on a diet, and for that Rihanna, we thank you. Given that Leo is known for only dating models ages 21-24 we're happy to see him pick up a girl that actually has some spark to her. Keep his a** in check, RiRi.

Guess which one of these was on the cover of Vanity Fair this month? Surprise, it's up and coming actor Miles Teller. Kendall and Miles' careers are both taking off and it would be a nice change up for one of the Jenner-Kardashians to date somebody whose ego is smaller than Kanye West's.

The How To Get Away With Murder hottie has yet to reveal whether he is gay or straight and given how hot his hookup scenes are on the show we think he'd be a perfect fit for either of these two. Which will he choose?! Jack, we need answers.

Much like Leo, we hope that Jake Gyllenhaal breaks his streak of twenty-something models and settles down with our favorite Pitch Perfect star Anna Kendrick. Anna has a knack for the theatre and Jake has been doing numerous stints on the big stage so we think these two have plenty in common. Also, we think Maggie Gyllenhaal would approve.

Superman + Elena Gilbert = match made in heaven. That is all.

Nicki has sass for days and The Rock needs a woman who can stand up to him so we think these two would be an epic match up. With her booty and his biceps they may even be too hot handle.

Both of these two have a history of being players and know their way around dating A-list celebrities, which is why they would be a good match for each other. The daughter of Goldie Hawn is intimidated by nobody, even Michael Fassbender's German hotness.

The Brown University graduate said she loved her American university experience. What is more American than Captain America himself? Nothing.

Chris is hot, Miranda is super hot. We feel like Chris likes Aussies and Miranda probably loves men with beautiful blue eyes, she does have a pulse after all.

Speaking of two people who absolutely slay the dating scene, we think it's time these two dating veterans officially settle down. Who can beat playboy Gerard Butler at his own game? Jenny from the block, that's who.

The Fast and the Furious 6 smokeshow and mixed martial arts badass (we're referring to Gina, not Tom) could only be happy with a man as jacked as Bane himself. Can somebody say couples boxing class?

You might recognize this well endowed beauty as the girl that won over (and handcuffed) Woody Harrelson in True Detective and James Marsden is a recently divorced man so what better to cheer him up? If they could get together for James Marsden's third Nicholas Sparks movie we wouldn't hate it...hopefully handcuffs are involved again.

They both are fantasy superheros: he's an elf and she's the mother of dragons. Orlando is back on the prowl after his divorce from Miranda Kerr and we've seen what Khaleesi is capable of, girl gets what girlfriend wants.

The Blurred Lines and Gone Girl stunner has yet to make her dating debut since her and her tata's hit it big. Who better than paparazzi vet Liam Hemsworth to sweep the swimsuit model off her feet?

Both of these two have already been married and have very serious acting resumes, and lucky for us, Hugh Grant is not a scientologist nor does he enjoy jumping on Oprah's couch... and we're pretty sure his love of hookers is a thing of the past. They both have kids of their own and are ready for a drama free relationship, mazel tov you two.

So these two have dated before, and they were absolutely too precious on The Office not to make this list. Ryan Howard and Kelly Kapoor forever.

Kristen Stewart has managed to win our hearts back after her little mishap involving a vampire and a handsy director. So who better for her return to the dating scene then fellow hipster and manbun pioneer Jared Leto. Let's just keep the directors behind the camera in the future.

What would be better than Tim Riggins and Regina George uniting and ruling over Canada? This would be the only appropriate rebound from America's sweetheart Ryan Gosling, bonus: their kids would be absolute stunners.