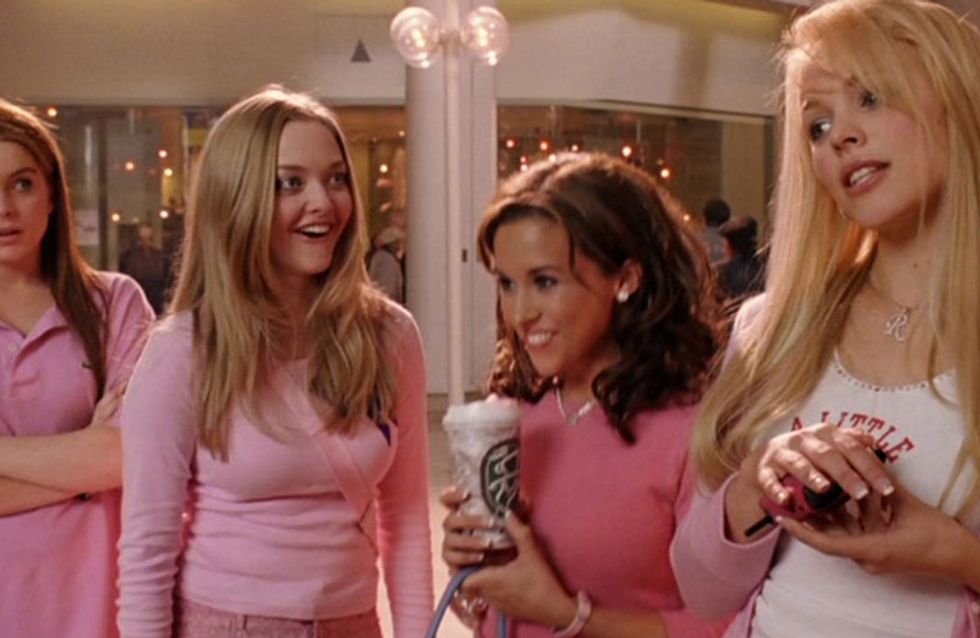 The second your parents decided to pack you off to an all-girls school, you probably seriously considered putting yourself up for adoption, but turns out it was actually pretty gr-ool. Yep, that's a Mean Girls reference. They'll be a lot of those. Roll up ya skirts, here's 19 things you'll only understand if you went to an all-girls school.

Having-been starved of the opposite sex for a substantial part of your life, the subject of boys was much appreciated amongst the babble of all-girls schools. God forbid anyone should get a boyfriend! You wanted to keep the relationship on the DL? No chance of that happening here.

2. They see me rolling

Rolling up your skirt was a familiar custom not even the strictest teachers could put a stop to. If ever cornered in the corridor and made to do the shameful show-of-waistband-and-roll-down manoeuvre only to wait 5 minutes to roll it back up again. Who wants a rep of the 'school prude' with the hem down to ya ankles? No ta.

3. Male P.E teachers had no chance

The appearance of any male species in the building was enough to issue a major ruckus; whether it be a mildly attractive male teacher (probably the head of P.E right?), a trip from the local boys school or the new clan of lower sixth formers, they were bound to turn heads.

4. Nothing got people talking like guys at the school gates

And again, when you spotted a group of guys loitering outside the school gates - a sight of curiosity and wonder as you sussed out their uniform and who they were waiting for. Any eye contact made you feel (weirdly) as if you'd done something wrong, despite the fact you've just left the anti-fraternizing area. You'll never take mingling for granted again.

Due to the distinct lack of boys, prom was always an awkward affair for most. Unless you were lucky enough to hook up with the all-boys school nearby for their prom, the girl-boy ratio would probably have been laughable. But really, it's just an excuse to dress up and have fun with the girls instead. No prom king necessary!

6. You needed an oxygen mask in the gals loos

You knew too well to avoid the ladies' loos after the final school bell on a Friday, which would be a swarm of girls around mirrors plastering on makeup, spritzing themselves with So...? Kiss Me and of course rolling up that skirt some more. Should you be so brave as to go in, you felt lucky to escape with your life, most likely with the offensive smell of Charlie Red lingering for days.

7. Giving zero sh*ts about how crap you looked

The freedom of not giving a sh*t about how you look - you'd give anything to have that luxury now. You knew rocking up with no makeup in the same old frumpy getup and hair pulled into a sloppy bun awaited no judgment, and with no boys to impress, you could all look grim together - #winning.

8. Periods were always on the table (not literally, cos ew!)

There's absolutely zero shame. Surrounded by hormones, syncing BFF cycles and the everyday cry of "has anybody got a tampon?!", periods are discussed as openly as what you're having for dinner tonight. Oversharing knows no bounds here.

Of course, it wouldn't be an all-girls school without the standard lesbian rumours. By now you're most likely familiar with taunts of "The Lesbian School" coming from the smug mixed schools in the area. Despite denying this label, a large part of lunch break convos featured the question: "So, who's next to come out?"

Lunch times also included endless hair plaiting, impromptu group karaoke sessions and generally stuffing your face. These are all skills that you consider to have taken with you into later life, even if you never quite mastered a pitch-perfect version of In The Jungle. FYI, we hate to break it to you, but you probably never will.

11. Sports day was the worst day of your life

You considered sports day as your closest experience of warfare IRL. Displaying patriotism at its finest, clad head to toe in ugly primary colours and screaming the team warrior-style songs, followed up by facing your opposition and an attempt at a traditional haka, no doubt - this means WAR. And those athletic shorts they made you wear, no wonder so many girls collectively "came on" on sports day.

12. Mean Girls was always a point of reference

Your friendship circle wasn't a real girl group until you had assigned yourself and your friends a character from Mean Girls/Wild Child/St Trinian's cast, although sometimes you wondered whether being haled a real life plastic was a good or bad thing ...

Forging each other notes from your 'mum' to get out of P.E was an act of true friendship. Note that using your period as an excuse would usually work too, particularly if the teacher was a dude. Manipulation? We prefer assisted bluffing.

14. And they'll be your true friends forever

These girls are probably still your closest pals - forever willing to create more unforgettable memories (and hangovers) for years to come.

15. The rage you felt for that one teacher that always told you to take your makeup off

You could always rely on your form teacher to tell you if you looked like you'd put your makeup on using a trowel this morning. Cue the hand out of Boots cucumber makeup wipes and a whole lot of scrubbing.

Inter-form dance was one dramatic leap after another to wartime music. And the same form group won every single year, 'cos they had all the dance gals in there. Not that we're bitter or anything.

17. Mufti days were both a blessing and a curse

Mufti days took at least 3 weeks of prep and when the time came it was like walking into a scene from Gossip Girl. So. Much. Judging.

18. Someone was always pregnant

Then there were the pregnancy rumours circulating every single week. Even the male PE teacher was pregnant at one point.

It was all about Jane Norman and River Island betches. Mwah.

Did you go to an all-girls school? Share your funniest memory with us @sofeminineUK!