Anne Hathaway nearly drowns in Hawaii - Saved by nearby surfer

Oh no! Anne Hathaway nearly drowned while on holiday in tropical Hawaii. The actress got caught up in a dangerous rip tide while swimming off the coast of Oahu. Luckily a brave surfer was nearby who jumped in to rescue the drowning star, leaving her ashore with just a minor wound to the foot.

In a bid to beat the winter blues in America, Anne Hathaway and her husband Adam Shulman set sail to Hawaii to enjoy a little fun in the sun.
​
​She seemed to be having a blast bike riding, swimming, and taking part in a whole host of outdoor sports, but Anne did have one mishap during her hols when she found herself caught in a dangerous current.

The ordeal started when the Les Miserables star was seen screaming as she was caught in a rip current off the coast of Hawaii on Wednesday, 9th January.

Onlookers saw the screaming star and quickly came to her rescue. She managed to survive the rough waves with the hero-surfer carrying her out with only a small scrape on her foot, which was injured when crushing waves pushed her against a reef. Phew!

Her husband Adam was nearby on the beach where he managed to get his hands on a first aid kit and tend to poor Anne.

Photos show her hubby sucking her left toe before proceeding to bandage up the wound. Awww.

The starlet was seen earlier that day making a dip in the ocean while also hitting the waves with a boogie board with her husband.

In a recent interview with Glamour magazine the star gushed about her husband, “He's a good man. He's beyond intelligent. He loves fearlessly. His beliefs are beautiful.”

She added, “He's my best friend. I love him. I just feel that I have the greatest husband in the world for me.”

The lovers met through mutual friends in 2008 and dated for three years before tying the knot last September.

Anne has been working on several projects including her recently completed movie Song One where she plays a archaeologist who falls in love with a musician and comedy Don Peyote which features A-listers Josh Duhamel and Jay Baruchel.

What do you think of the heart-stopping ordeal? Tweet us @sofeminineUK 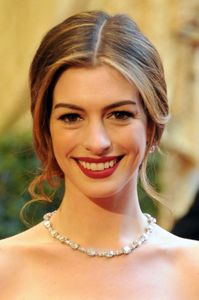 by the editorial team
+
All the news about Anne Hathaway