This Women Found A 70-Year-Old Note In A Book. What Happened Next Will Warm Your Heart

What would you do if you found a 70-year-old note tucked away inside a used book? Would you wonder whom it belonged to? Chuck it in the bin and just carry on reading? For book enthusiast Samantha Sachs, it was an opportunity to reunite the old note with its owner.

The note, which Sachs found in a copy of a book called ‘A Tree Grows in Brooklyn’, (one of Sachs's late Grandmother’s favourites) was written by a child and read: “Daddie I miss you, love Johie,” accompanied by drawings of planes.

Beneath the note, an adult hand had written: “Received in Rochester, Minnesota, 31 January 1946. Johny’s first letter to me.” Check it out:

The original owner of the book had also written their name, Luis A. Passalacqua, giving Sachs everything she needed to find the original owner’s family. Speaking to the Herald Tribune, Samantha said: “I knew I had to get it back to the family. I got this feeling, like I was connected to this child somehow through time. I know if somebody found something like that of mine from long ago, I’d want them to try to find me.” 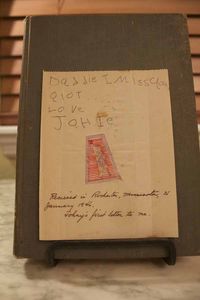 After a little research, Samantha managed to track down the original owner of the book, who was a Marine Corps lieutenant colonel. However, he had sadly died decades ago and his son Johny, the little boy who had written to him, had died in just 2013.

However, Luis had another son, Luis Jr, who Sachs discovered was living with Puerto Rico and managed to contact. It turned out that a flood had destroyed many of Luis Jr's books and family documents, and so the return of the book meant that much more. After she mailed him the book and his late brother’s note, Luis Jr, 89, called her to express his thanks and offering to let her stay, which she planning on doing this year.

To read more about Samantha's journey, go here. Would you like to be reunited with an old note from a family member? Tweet us @sofeminineUK.