Charlize Theron forced to shave hair off by director

Charlize Theron is reportedly devastated that she has to shave her hair off for a second time. She first lost her locks for the upcoming film Mad Max 4: Fury Road. You’d think suffering for your art just the once would be enough, but unfortunately for Charlize’s blonde tresses, the director has decreed that some scenes need reshooting, meaning that the poor actress needs to whip out those hair clippers again, and she's reportedly not very happy about it.

Charlize Theron is reportedly “devastated” after being ordered to shave her lovely blonde hair off.

The 38-year-old actress originally rocked the shaved head look for upcoming film Mad Max 4: Fury Road, and was said to be pleased when filming wrapped so that she could grow her hair out again.

But it looks like Charlize should have maintained that buzz cut look a little longer, as she's allegedly been called back for reshoots of several scenes, meaning that she will once again have to say goodbye to her shiny tresses.

The Snow White and the Huntsman star is apparently furious that she has to shave her head again, with an insider revealing to The Mirror: “Charlize really didn’t love having a crew cut and was thrilled when it eventually started growing out. It’s now at a great, workable length and she has been proud to show it off.”

Celebrities pay tribute to 'heroic' Nelson Mandela
The world is in mourning following the death of former South African President Nelson Mandela. Prince William and a number of other celebrities have paid tribute to an "extraordinary and inspiring man" who helped to bring an end to apartheid. The Nobel Peace Prize winner died at his home in Johannesburg, South Africa, last night aged 95.

Ah well we suppose that’s what happens when you show off Charlize. Call this a lesson!

Unfortunately audience tests showed that cinema-goers were less than impressed with several scenes in the latest Mad Max instalment, leaving the writers and director no choice but to reshoot the big-budget movie.

Since Charlize has signed a contract, she has to have the chop again, as a source said: “Charlize is obviously contractually obliged to go along with any re-workings of the film, and will soon be shaving off her hair once again.

"She is devastated. It also means a few more gruelling workouts to regain the athletic physique she had over a year ago.”

The actress - who plays the part of Imperator Furiosa in the series - originally kept her new (lack of) hair a secret, hiding it with hats. Well, it’s a good thing winter is coming up again and she’ll have a good excuse to pull out all of her old hats again!

Although having to shave your hair off twice might be rather unfair, Charlize has previously shown no problem in transforming herself for a role, as she won an Oscar for Best Actress in the 2003 film Monster after gaining 35 lbs (over two stone) and wearing a set of prosthetic teeth. Seriously, you would never have recognised her.

Several other actresses have ditched their hair for their art, including Natalie Portman for V for Vendetta, Demi Moore in G.I. Jane and Anne Hathaway in Les Miserables.
​
Seriously though, we think Charlize is beautiful enough that it hardly matters what her hair looks like!

Do you think she pulls off the bald look? Tweet us @Sofeminineuk 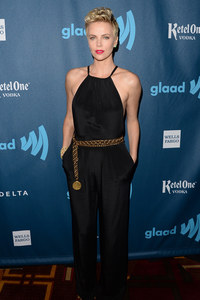