by Alison Potter Published on 1 October 2012

Check out Christina Aguilera's drastic weight loss. Is liposuction to blame?
It’s not uncommon to see celebrities get their crows feet smoothed and wobbly bits sucked away and with Christina Aguilera’s recent jaw-dropping weight loss there's been speculation that The Voice USA judge has done just that. What do you think? Did Christina get in shape the hard way or did she have a little helping hand...?

Christina Aguilera has revealed the intense pressure she was put under by her record label to lose weight.

The Fighter singer has alleged that music industry executives ordered her to slim down after she gained weight following the release of her multi-platinum album Stripped in 2002.

Mother-of-one Christina told Billboard magazine: “During the promotion of Stripped in 2002 I got tired of being a skinny, white girl.

“I am Ecuadorian but people felt so safe passing me off as a skinny, blue-eyed white girl.”

As the former Voice judge began to accept her natural Latin curves inherited from her South American father, her horrified record label began panicking that it would negatively affect her public image. 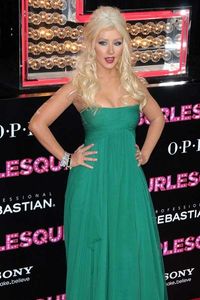 The Dirrty singer continued: “The next time my label saw me, I was heavier, darker and full of piercings!

“Let me tell you, that wasn't an easy pill for them to swallow. I had gained about 15 pounds during promotion and during my Stripped tour.”

Although the five-time Grammy Award winner can now laugh about it, at the time Christina was so distressed by the pressure piled on her to lose the weight that she didn’t think she could object.

She recalls: “They called this serious emergency meeting about how there was a lot of backlash about my weight.

“Basically, they told me I would effect a lot of people if I gained weight -- the production, musical directors.

“[They claimed] people I toured with would also miss out if I gained weight because I would sell no records or tickets for my shows.

“I was young, so I lost the weight quickly and was toothpick thin during Back to Basics promos and touring."
But as the 31-year-old prepares to release her latest record Lotus, she’s older and wiser about the music industry.

For her comeback, Christina has said that she will not bow to weight critics who demand that she meet their unrealistic expectations of how much she should weigh.

She described how she told her label prior to the release of her seventh album: “You are working with a fat girl. Know it now and get over it.”

Adding to Billboard magazine: “They need a reminder sometimes that I don't belong to them. It's my body.

“My body can't put anyone in jeopardy of not making money anymore - my body is just not on the table that way anymore.”