Sportsman and noted style icon David Beckham is one of the most photographed men in the world (especially when in his pants).

But the celebrated British footballer is the first to admit that he’s made a few style faux pas over the years - and not just the sarong he famously wore in 1998 when on holiday with wife Victoria Beckham.

He’s had more looks than the notoriously chameleon-like Madonna and he changes his hair more than most female and male celebrities combined.

Although the father-of-four is credited with playing a huge part in smartening up the average British male, the LA Galaxy player laments some of his less successful looks.

Recounting previous grooming disasters, the 37-year-old admitted to ShortList magazine: "There have been one or two haircuts that were close to the mark, that I look back on and think were mistakes. 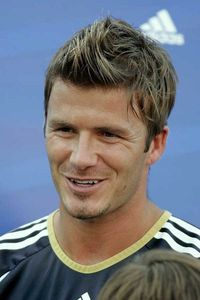 "Not mistakes, but different to what I'd do now. But I'm a lot older now.

“The cornrows were something a bit different, but I was in holiday mode when I had them done.

“I was with a friend who’s a hairdresser and who’s very good at cornrows. So I thought, ‘Why not do that?’

“I think I’d had a glass of wine or two. And I’d have to say the Mohican. I wouldn’t do them now, but at the time they felt good.”

Despite feeling a bit red-faced over previous hair disasters, David confessed that few other things get him flustered - including the time his wife of 13 years admitted that her nickname for him was “Goldenballs”.

David was the butt of many jokes when Spice Girl Victoria, 38, let the pet name slip, but the devoted dad holds no grudge against her.

Asked if he would go back and stop it being made public knowledge, the former England Captain confessed: “No. Not at all. It made me laugh. It still makes me laugh when people say it.”

And when offered the chance to get his fashion designer partner back by revealing her embarrassing nickname, gentlemanly David politely declined: “No, I’ve got nothing in my bag.”