We hope you're wearing black veils and sobbing into your hankies girls, because the last bachelor George Clooney is officially off the market! The actor married his girlfriend, human rights lawyer Amal Alamuddin, at the weekend in a private ceremony in Venice. We're not jealous. We never would have wanted to marry George Clooney in Venice or anything. Nope. *Sob*

George Clooney and Amal Alamuddin are officially husband and wife! The couple said exchanged vows at the weekend in a private, and we can only assume, absolutely spectacular ceremony (surely there must have at least been fireworks to celebrate George finally getting hitched!). As predicted, the pair was hitched in the Palazzo Papadopoli, which, for those of you who don't know, looks like a Venetian Downton Abbey. Okay, maybe we're a little jel. 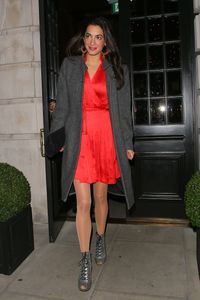 The pair then left the seven-star hotel to continue to festivities at the Cipriani because really, why celebrate in one palace when you could celebrate in two?!

If you were in Venice at the weekend and spotted any Hollywood A-listers partaking in a spot of gondola-rowing, George's wedding will be the reason. The acting veteran invited the whole Oscars brood, including Oceans 11 co-stars Brad Pitt and Matt Damon as well as Ben Affleck, Anna Wintour and Emily Blunt.

The couple arrived in Italy on Friday to finalise the wedding preparations, greet guests, and one imagines, drink champagne. George and Amal took advantage of their free day to take a short boat ride before joining their guests at night for the rehearsal dinner. For the occasion, Amal arrived decked out in a stunning red Alexander McQueen dress.

Although you'd have thought they would just enjoy their big day, nothing is done by halves in celebrity la-la-land, and apparently the newly weds celebrations lasted for FOUR days! Does that mean it's still going on? Does that mean we can still get invited?!

Are you happy for the Clooneys? Tweet us @sofeminineUK!​