Jennifer Lawrence probably isn’t the best person to get involved in an argument with. She’s Hollywood’s hottest young star, the second youngest person ever to win an Oscar, and has hoards of teenage mega fans from her starring role in The Hunger Games. That’s right – she’s young, she’s powerful, and she has an army. We don’t think Joan Rivers entirely thought things through when she slated her on Twitter yesterday.

Joan Rivers snapped back at Jennifer Lawrence via Twitter after Jen spoke against the negative impact shows like Fashion Police have on body image.

The 23-year-old actress spoke against the show in an interview with Yahoo CEO Marissa Mayer.

When asked what her response was to those who judge people on their appearances, she stated: “You just have to look past it. You look how you look. What are you going to do – be hungry every single day to make people happy? That’s just dumb.

“There are shows like the Fashion Police and things like that are just showing these generations of young people how to judge people.
​
“They put value on things that are wrong and think it’s okay to point at people and call them ugly and call them fat and they call it ‘fun’ and ‘welcome to the real world’ and it’s like that shouldn’t be the real world, but it’s going to keep being the real world if we keep it that way.”

Sounds about right to us, but the 80-year-old TV personality has hit back at the Silver Linings Playbook actress in several tweets.

One stated: “It’s funny how Jennifer Lawrence loved @E_FashionPolice during Awards Season when we were complimenting her every single week…”

She then wrote: “But now she has a movie to promote, suddenly we’re picking on all those poor, helpless actors.”

She finally came out with the line: “WAIT! It just dawned on me why Jennifer Lawrence fell on her way up to the stage to get her Oscar. She tripped over her own arrogance.”

Whoa. Arrogant? But Jennifer is so hilariously self-deprecating! Why are you saying these things Joan?!

The people of Twitter also seemed slightly aghast but mostly amused that Joan Rivers was picking a fight with JLaw, with @TheOnlyFeed stating: “you won’t win an internet war with Jennifer Lawrence.”

The Twitterverse has spoken Joan! 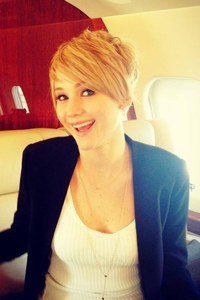