Liam Hemsworth has remained relatively quiet – basically silent – over his relationship with ex-fiancée Miley Cyrus and her near-naked performances that were largely rumoured to be the final straw for their engagement. However he has now hinted his disapproval of women showing too much skin - is that a subtle dig at Miley, Liam? We think it may well be!

Liam Hemsworth has dissed Miley Cyrus’ scantily clad ways by agreeing that using sex to propel your career is a “disgusting” part of the entertainment industry.

The 23-year-old actor has been making the red carpet rounds for his new film The Hunger Games: Catching Fire, where he plays one third of the series love triangle along with Josh Hutcherson and Jennifer Lawrence.

It was Jennifer, who plays the film’s protagonist and all-round approvable female role model Katniss Everdeen, who first spoke out against dressing too revealingly, telling BBC’s Newsnight: “It is a part of the entertainment industry that sells. Sex sells, and for some disgusting reason young sex sells even more.

Jennifer Lawrence is fast becoming a spokesperson for healthy body image, having spoken out against losing dramatic amounts of weight for Hollywood in an interview the other week, and she has become a role model for young people, rather than singers such as Miley Cyrus who light up spliffs on stage.

When Liam Hemsworth was told about Jen’s comments, he agreed wholeheartedly, telling E! News: “I agree with her. I would say exactly that.”

When asked about what he personally found sexy, for some reason beige latex bikinis and fishnet dresses didn’t come up, instead he said: “I’d say just do what Jen does. She seems to do it right."

Stop sucking up to JLaw, Liam! Or keep sucking up if you like, we love Jen. We know from the Silver Linings Playbook star’s style sense that Liam obviously likes his girls classy. Everyone stock up on the pearls and cocktail dresses, lest we should bump into him!

Liam was also a perfect gentleman about Miley’s career, saying: “I’m extremely happy for all of her success.” Aw, Hemsy!

The Last Song star then spilled – albeit the tiniest bit – about his love life, basically insinuating it was non-existent. He said: “I don’t have a lady at the moment.”

Everyone grab their running shoes, we think we’ve watched enough of The Hunger Games to know how to hunt him down!

Do you love a bit of Liam? Tweet us @Sofeminineuk 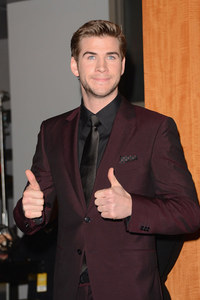