by Alison Potter Published on 17 December 2012

WATCH: How can you win a double date with Ben Affleck and Matt Damon?
Hoping two mega-stars with hearts of gold to take you out to a VIP Hollywood event? Perhaps you are trying to help those in need around the world? Matt Damon and Ben Affleck have just the thing for you! Through Omaze.com, the dynamic duo have set up a contest, where for ten dollars, you get the chance to win a double date with them. And all the proceeds go to help two great charities: Eastern Congo Initiative and Water.org. Sign us up, stat!

Matt Damon and Ben Affleck have been plagued by rumours they're more than just friends for a number of years.

The pair - who’ve been best mates since childhood - first shot to fame after writing and starring in their Oscar-winning film Good Will Hunting in 1997.

While they have both married, had children and bought houses down the road from each other, the Hollywood heartthrobs have been decidedly silent in the face of gay accusations.

But now Matt has finally broken his silence and opened up about why they didn’t bother denying their supposed romance.

The Bourne Identity star told Playboy magazine: “I never denied those rumours because I was offended and didn’t want to offend my friends who were gay - as if being gay were some kind of f*cking disease. 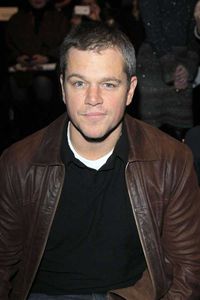 “It put me in a weird position in that sense. The whole thing was just gross.”

The 42-year-old actor was furious at the time, especially as he was put in the difficult situation of possibly upsetting the gay community if he denied the rumours.

But thankfully it never affected his close friendship with his school friend Ben and they’ve continued to be best mates and work together producing movies for their company Pearl Street Films.

In recent years, the father-of-three has become more vocal about his political views and alongside his former co-stars George Clooney and Brad Pitt, he has been a passionate supporter of gay marriage.

Matt continued: “But look, there have been great signs of progress - the fact that Anderson Cooper and Ellen DeGeneres can come out so beautifully and powerfully, and it’s a big f*cking deal that it turns out nobody gives a sh*t.”

While Matt is relieved that people can be more open about their sexuality without being ridiculed, he admits that if he was involved with Ben, he would be a pretty lousy partner.

The Elysium star has been married to his wife Luciana for seven years, but he’s pretty bad at all that romance stuff.

He admitted: “I wish I were better because my wife deserves somebody who surprises her with a gift or flowers or some wonderful idea.

“I’ve never been good at that, and she’s really good at it, which makes me feel even more like sh*t.”

Nonetheless, he does clearly adore the mother of his three children.

He continued: “This is the first relationship I’ve had that wasn’t like work to be in. I never knew it could be like this.”

Ben Affleck as Batman: Fans furious after actor is confirmed for superhero role

by the editorial team
+
All the news about Ben Affleck