by Alison Potter Published on 24 January 2013

Nicole Scherzinger is usually one of the most glamorous and well-styled stars on the red carpet.

She regularly tops best dressed lists wearing gowns that show off her enviable figure, which was why her choice of outfit at the National Television Awards was so shocking.

The 34-year-old donned a William Vintage Ossie Clark black floor-length gown with long sleeves, a thigh-high central split and a deep V-neck for the glitzy bash at the 02.

Nicole teamed her outfit with a long Chanel roman coin pendant and despite the chilly weather opted for a pair of strappy black sandals to complete her look. 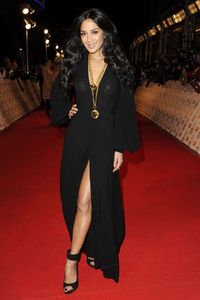 But what she didn’t realise is that when the blinding lights of the cameras on the red carpet flashed, it turned her dress see-through and her nipples were visible beneath her plunging dress.

Opting not to wear a bra, luckily the former Pussycat Doll had remembered to wear strategically placed nipple covers, so she was able to retain a degree of modesty when her dress turned sheer in the lights.

Although Nicole had clearly spent hours having her sleek raven hair styled into curls and make-up flawlessly applied, all eyes were on her unfortunate wardrobe malfunction.

To make matters worse for the Hawaiian-born star, The X Factor lost out to Strictly Come Dancing for the Best Talent Show prize.

Since the category launched in 2007, the X Factor has won the award every year except for one, but Nicole proclaimed she was “proud” of the last series of the ITV show and looked happy enough to pose with fellow judges Tulisa Contostavlos and Gary Barlow.

Also at the NTAs was Nicole’s former bandmate Ashley Roberts, who picked up the award for Best Entertainment Programme for the latest series of I’m A Celebrity...Get Me Out Of Here!

She had no such wardrobe malfunctions and looked stunning in an ivory embellished dress, which had an intricate neckline.

Following the awards, Nicole revealed to the MailOnline that she had caught up with fellow Pussycat Doll Ashley and that potentially they could be working together again sometime in the near future.

She said: “Of course we have caught up recently and I supported her on the show. Well I would like to say yes to a Pussycat Doll reunion, but you don't know.”