by Dagney Pruner Published on 12 February 2015 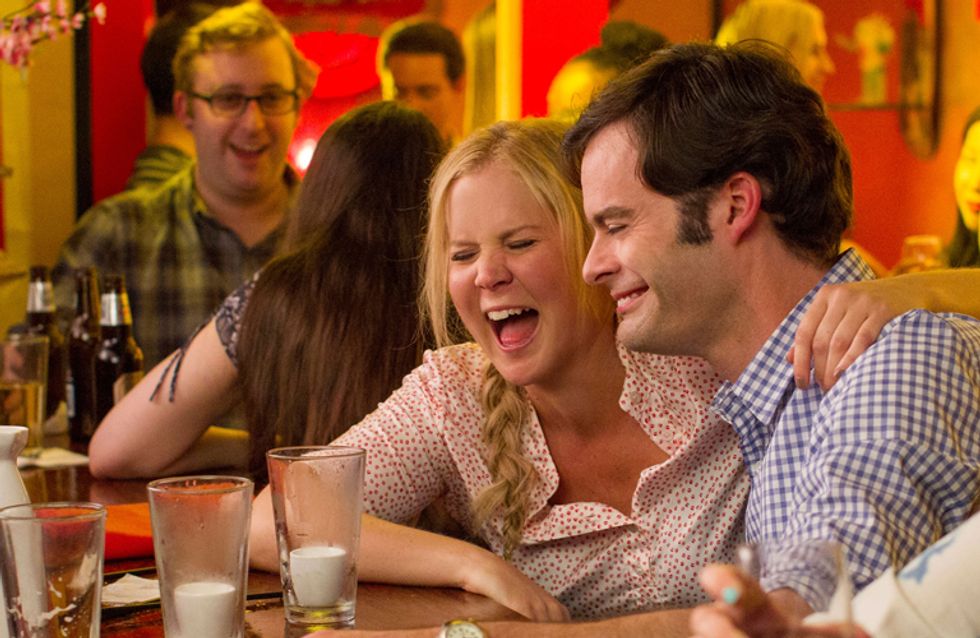 If you haven't heard of Judd Apatow then you probably hate laughter, comedy and most likely potty humour. The brilliant producer of classics like Knocked Up, Bridesmaids and Girls is back with a hilarious new film called Trainwreck about a girl who is killing it in New York City and HATES monogamy. Here are all the times we thought the heroine, played by the hilarious Amy Schumer, was our spirit animal.

1. Girls have every right to play the field

2. Ain't nothing wrong with a very obvious walk of shame

As you can see in the trailer, and in real life, the homeless men on the corner or your doorman that judges you when you come in the next morning in your sequined skirt are really just jealous of your wild night. Did we just come back from church? No. However we did crush the dance floor last night so feeling pretty damn good this morning, thanks for asking.

3. We know we like a guy when we'll lie to them to seem cool

When Amy's love interest asks her if she knows anything about sports and she says of course, and then proceeds to say her favourite team is the "Orlando Blooms," THAT is when you know you like a guy. Being yourself is easy, but when you really like a guy you want to put your best foot forward...even if that means pretending to be somebody you're not. When the desire to do this wears off, that's what we call the end of the honeymoon phase.

4. Women dress their men so nobody else wants to hook up with them

So we may not be able to put it as delicately as Amy when she describes the totally wifed-up/Dad outfits men wear once they move to suburbia: "Does he teach computer in a church basement? Oh, you dress him up like like that so nobody else wants to have sex with him? That's cool." But she hit the nail right on the head. Be proud of your hubby and his ability to look amazing in something that is not a sweater vest, pleated pants or New Balance sneakers with mom jeans. You either trust him or you don't wifeys!

5. Boxed wine in movie theaters is a must

It may not say BYOB on Fandango, but we know better. So does Amy Schumer. Don't forget the straw.

I have been trying to pinpoint exactly what John Cena looks like for years. In addition to looking like a G.I. Joe come-to-life experiment gone wrong, he also looks exactly like Mark Wahlberg ate Mark Wahlberg.

7. Intimacy and relationships are actually terrifying

Sure girls go around whining when they are single about how they are just dying to fall in love and have an amazing boyfriend, but when it actually comes time to lay your heart on the line and open up to a dude, it's actually extremely scary and it feels way easier to just put up a guard and keep things casual. Does that mean we want to have our whiny cake and eat it too? Absolutely.

8. It's about time Lebron James began his acting career

The King a.k.a. Lebron James has finally made the jump from sports legend/brand spokesperson to actor and it's about time he did. Given his short cameos in the trailer it actually looks like he is going to do a pretty decent job. I may not remember who he plays for anymore after all of his flip-flopping, but I know for a fact it's not the Orlando Blooms.

9. Nobody actually calls the day after they hook up with somebody

When Amy gets a call from her newest hook the morning after they just did it for the first time, she freaks out and said it's probably a butt dial, or as her friend correctly points out he is probably sick... and that she should probably call the police. She then does the only thing that you can do in a situation like that: hang up on the nice guy that is trying to give you a follow up call. The struggle is real.

10. The only reason you would drink less is if you're on antibiotics

When Amy's friend asks her why she spent the night and she asked if she was blackout, Amy said she only had two drinks, maybe three, okay four now that she thinks about it. Her friend's concern for her low drinking level and deciding to spend the night at a man's could of course only be explained by her being on antibiotics. We all know this.

11. Your parents views on relationships definitely affect your outlook

Amy grows up with a dad who drilled into her head "monogamy is not realistic" and unfortunately what our parents say about relationships matters. We spend 18 years at home with their words and ideals filling our ears so when we're older it's hard to shake their outlooks on life. This is why therapy is a multi-billion dollar business.

This feminist flick comes out July 17th and we could not be more pumped. Amy, thanks for telling the truth when we couldn't.

Do you think this flick totally speaks to your life as much as we did? Tweet at us! @sofeminineUK!