Bereaved Lea Michele took to the Teen Choice Awards stage last night to dedicate her win to her late boyfriend and co-star Cory Monteith. She took the opportunity to thank all her fans for their love and support in a tearful and moving speech.

The actress won a Teen Choice Award for her role as Rachel Berry in Glee and chose to dedicate it to him.

The heartfelt speech left Lea fighting back tears as she spoke of Cory's loss and her support from her fans.

A number of Lea's cast mates were there to support her on stage and also shed a tear during her words.

She took to the stage to accept her prize and told the crowd and everyone watching at home: "I just wanted to be here today to personally thank all of you and tell everyone out there how much all of your love and support has meant to me over these very past difficult few weeks."

Ever the professional, the 26-year-old kept it together to continue her dedication with her hand clasped to her chest. 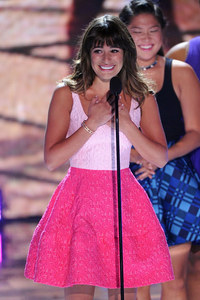 She said: "I wanted to dedicate this award to Cory, for all of you out there who loved and admired Cory as much as I did, I promise that with your love we're gonna get through this together.

“He was very special to me and also to the world. And we were very lucky to witness his incredible talent, handsome smile and his beautiful, beautiful heart."

And she gave a special mention to all the Glee fans mourning the loss of one of their favourite TV characters.

Lea continued: “So whether you knew him personally or just as Finn Hudson, Cory reached out and became a part of all of our hearts - and that's where he'll stay forever."

After getting a much deserved hug from her cast-mates, the group left the stage as Cory's photograph appeared on the screen behind.

The 31-year-old tragically died from a lethal combination of alcohol and heroin last month.

The Glee family are currently filming a tribute episode of the show to be aired in the US in September.

​Check out the stars arriving at the Teen Choice Awards 2013...

by the editorial team
+
All the news about Lea Michele

Francesca Menato
…
AwardsDeath
From hair ideas to outifts, look no further for your daily inspiration