Emotional Breakdowns, Crippled Feet & A Banging Head? Why Girls Nights Out Are SO Overrated

by Vivian KELLY Published on 14 October 2014 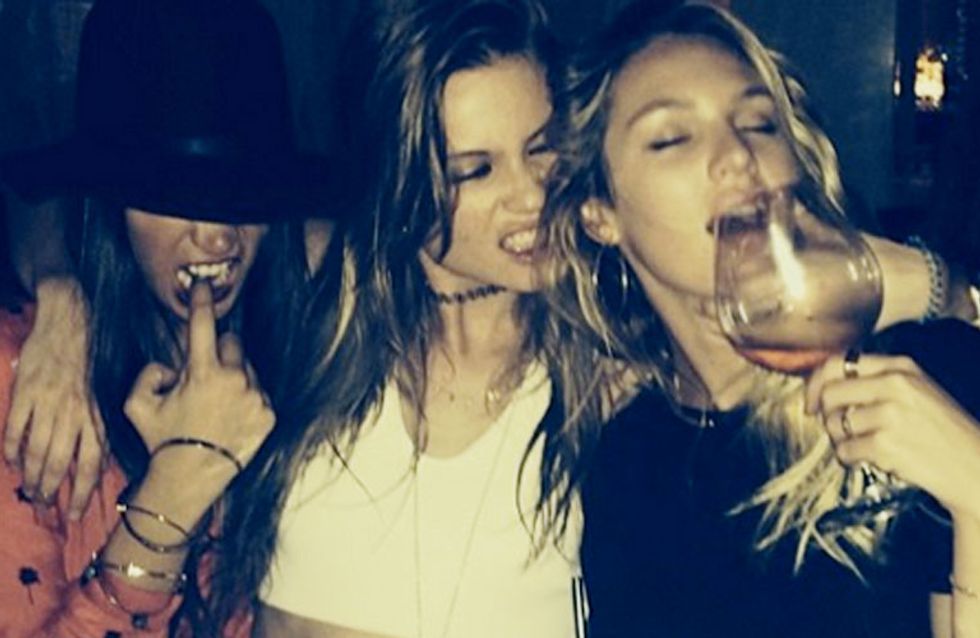 The thought of washing our hair, strapping on a set of false lashes and dolling ourselves up used to be a happy one. But once you hit your mid-twenties those days are well and truly over. In fact just thinking about a GNO makes us tired (and thirsty). You know what they say about a woman's relationship with her bed? It's a REAL thing. Here's why girls nights out can be SO overrated.

I remember the days when planning a girls night out was the highlight of the week. Dressing up, painting our faces and sipping on cheap wine? It was hands down a favourite pastime, but far from now.

Now nights out seem to consist of nothing more than pervy men and young rich mummy's boys trying to liquor us up. And that along with a banging head, crippled feet and a weekend spent in rehab mode, well yeah, it's just not so exciting anymore.

We'd be much happier with an evening of Netflix, a boyfriend shirt, no make-up and a tub of Ben & Jerry's. Agree? Here's why we're so SO over it...

Whether you admit it or not taking a shower before a GNO is E.F.F.O.R.T. Especially when you're pushed for time. The usual 45 minute sesh turns into 15 minutes tops (which is why more often than not a flannel wipe will just have to do). Glamorous, we know.

And when you thought that was enough there's still that ONE frantic hour before you have to go. Pulling out the hair dryer, curling tongs and polish while lathering yourself in fake tan takes true multitasking skills.

Bane. Of. Our. Lives. We're done with sweet talking the doorman and asking the owner for free shots. What's a girl gotta do to have a decent night out these days? RIP OFF.

AKA, the most arrogant people ever? It's a pretty accurate stereotype. Don't get me wrong sometimes they're cool and let you in, no problems, but sometimes they can really make your life hell. Heavy handed ain't even close.

All of a sudden all the dudes in the club look about 12 years old. Heck, most of them are probably still in their puberty years. Where are all the MEN?

6. Being peer pressured into shots

Girls can't filter alcohol like they did when they were eighteen so when we say 'No thanks. I can't,' we really do MEAN IT. Some of our girlfriends can still go the extra mile, but seriously - they're machines! Which is great but for those of us that are becoming less resistant to spirits please for the love of god, listen when we say NO.

Getting my arsed smacked in the club used to be a crude confrontation, but honestly, I just feel sorry for those boys. It's almost expected. A sad truth that ALL women deal with.

Now lets talk about the life-like barbie dolls. The Mean Girls wannabes that cuss out everyone else's outfits/hair/dance moves? Bottom line, we're just not into that catty sh*t anymore so please, count us OUT.

Once you're on your way to wasted town the night is guaranteed to take a dramatic turn. Whether your friend turns into a raging b*tch or someone keeps stepping on your toes there is bound to be a drunken confrontation.

By the time you're in your mid-twenties and you think you've picked up a decent man, he's already clocked on to your old ways. We admit it, we like a free drink! But the aftermath is never pretty.

This deserves a mention of it's own. Whatever it is, on a GNO someone is going to shed a tear. Whether you're having a heart to heart with your bezzie or can't help hounding down your ex boyfriend at the bar, those salty tears are going to make an appearance tonight.

12. Making a fool of yourself

13. Getting home is ALWAYS a nightmare

Unless of course you're all too inebriated night buses are standard practice after a night out. Sorry we might be a bit older but we're still not made out of money. One hour to get home is all it takes to save a nice lump sum of cash (that can go towards shopping) but let's be honest - the journey is dire.

As every year goes by it becomes more and more unacceptable to go barefoot (and go pee on the street). Which means walking in our heels all fricken night becomes a pretty difficult task. We. Just. Want. Our. Bed.

Waking up a thirsty camel is never pretty. Our heads are pounding, we can't bare the taste of water (but are forced to binge on it anyways), you're starving hungry but feel sick at the thought of food, you've lost your purse and money, you look like sh*t and then, BOOM, then come the flashbacks. Did I really do that? This isn't what we call fun anymore.

The process of recovery from a night out isn't like it was in our younger years. Suddenly the hangover that used to last a few hours has become a two-day affair. Physically and literally, you're bruised, mentally you're drained, and now you have the task of burning 500 calories from the kebab you gorged down last night (accidentally obviously).

Not to mention the clean up job of the post-party mess in your room. (That is, if you haven't burnt down your house from leaving your straighteners on.)

Are you so over girls nights out? Tweet us @sofeminineUK!

Stage-Five Clingers? Drunk Eating? Naps? 21 Stages Girls Go Through On A Night Out

30 Stages Girls Go Through Before A Night Out