Man Or Boy? Find Out Which One You're Dating

by Vivian KELLY Published on 2 April 2014 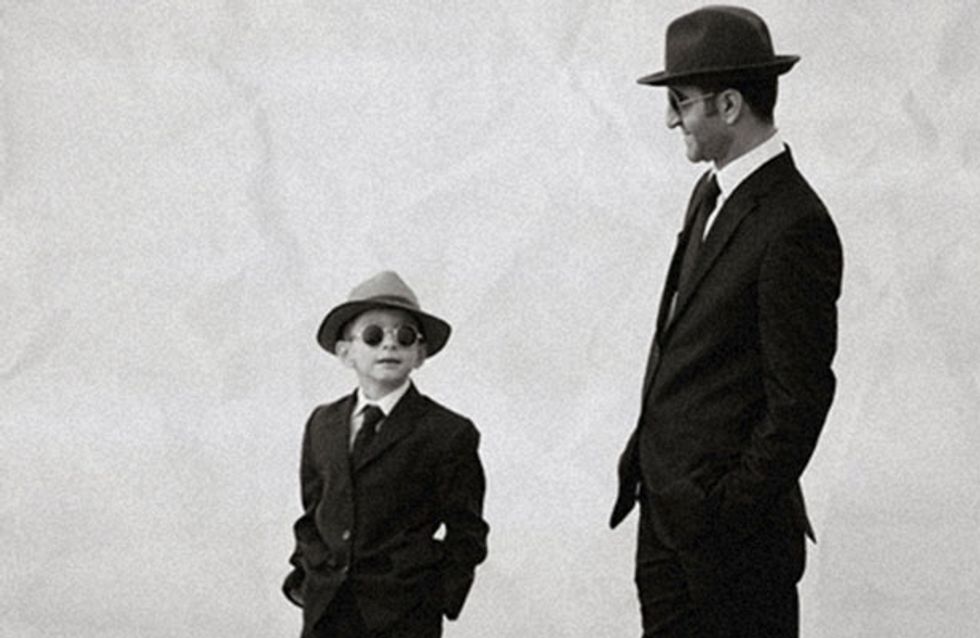 Having perennial issues in your relationship but can't seem to put an end to it? The reason is simple. He may not be ready to become a man. It's amazing that no matter what age we aim for nowadays some men still (and always will) have the mental age of a teenage. Wondering if your beau's a REAL man and not just an over-grown boy? Here are the top tell-tale signs to look out for...

BOY and MAN are two very different specimens. If you're stuck tending to a man-child things probably seemed great at first. That is, until he started showing you his true colours.

Does he always depend on his mom? Is he always hitting on other chicks? Some men know exactly how to treat a woman, but others? Their main concern is their PS4, leaving us with the egotisical BS and blasé attitudes.

There's no need to waste time with someone who's still trying to grow-up (or clearly isn't ready to). Find out once and for all if your boyfriend is a man or a boy by looking out for these signs of immaturity...

Repeating his third year? If your guy can’t hold down his studies then something is clearly wrong with his priorities. This is boy behaviour. But, if your guy is excited to learn more about his chosen career path or hobby, and has an ambition to make it in his chosen field you're probably dating a man. If he can commit to a subject, he can commit to you.

2. His holiday hot spot is Ibiza

If your beau still parties with underage high schoolers and describes Ibiza, Vegas and Corfu as the most 'amazing places on earth' well, that’s just embarrassing. Boy oh boy.

Better to find a man who is more into adventure and exploring than adolescent bikini spotting.

Things ain’t easy in the real world, but if he’s still unemployed after 3 months of 'job hunting' then your man better be applying to McDonalds. No real man would want to be out of work for that long.

If your man’s constantly repeating ‘I’ll get my mum to do it’ stop and ask yourself if you’re OK with having a relationship with his mum too. Until he lets go of his mumsy dependency things aren’t going to change.

If his approach to his mum is more of caring concern and wanting to take her out for a nice meal when he sees her next, he's displaying man behaviour girl! A guy who can take care of his mum without being a man child? That's a winner.

We have two words: Lame and pathetic.

Our advice? Find a guy who is less of a social media FOMO. He'll have way more time for you.

Can he never afford a dinner-for-two? Does his phone cut off on the regular? If he has the tendency to blow his money he's yet to grasp the importance of money management. Standard boy problems.

Time to find a hottie who knows how to handle cold hard cash.

If he’s constantly on Facebook to chat or is scouring through 'his friend's profiles' clearly he's got nothing better to do with his time. (Including talking to you.)

The sign of a true man is one that doesn't spend hours trawling through Facebook and striking up lame chats with his exes. He's sure of himself and he's sure about you.

Unless he's a student, getting trashed all the time is immature as hell. And kinda embarrassing. It wastes his free time, it wastes your time and who has time for that?

If he still believes in this concept, he'll probably never grow out of it until he’s single, middle-aged and wakes up one day realizing that all his friends and family are married and have children. BIG mistake buddy.

Find a man who will put you first, and neither of you will regret it. ​

10. Marriage freaks him out

Boys cannot handle the idea of marriage. Commitment doesn't sound cool or something. A real man? He can't think of anything better than lasting love.

11. He thinks violence is cool

If he thinks violence is cool, it's time for the boy talk to stop. We’re not into that middle school crap anymore. If he sizes up every guy that claims to ‘try him’ and can’t even take a joke then you're probably better off without him (and his fists). Yawn.

Grabbing a coffee or lunch by himself is NOT an option. Boys need someone there to keep them company. Stupid, right? Men don't break a sweat about doing things solo. It's called maturity.

At this age, he may as well sign a contractual agreement to live there FOR LIFE.

If he's always acting like the whole world is out to get him and constantly blaming others (for his mistakes) DON'T expect much from him when things get tough. The boy can't help you.

15. He has no personal goals

If his dream is to be the next Tom Cruise try not to laugh. A real man has ambition. A boy? He's still trying to find himself.

For boys, it's always 'me, me. me'. If he doesn't get that there are two of you in this relationship, it's a lost cause.

We doll up and rush around only then to be left waiting?! What's that all about? When guys mature they start to understand the importance of punctuality. Being on time for your girl has a lot to do with how much you respect her. For boys, 'it's no big deal'.

19. Video games and computer games are his thing

A real man knows that taking initiative is a huge turn-on for women. If he can't decide what movie to watch, where to go on holiday or what to do with his life, things are gonna go downhill, fast.

Sometimes he's so into you. Sometimes he'll reply to your texts straight away. Sometimes he'll surprise you. But oftentimes, he's an asshole. If your guy can't figure out how to be a good boyfriend 90% of the time, (hey no one is perfect) then he's still got some serious growing up to do.

Why are you with him if he does nothing for you emotionally and physically? If he's never there for you he obviously doesn't comprehend the meaning of a real intimate relationship. Times ticking - don't waste it.

This is a biggie. If has toys, no matter how big or small (we're talking motorbikes, cars, vintage action figures or the worst - an indoor train set) and seems to love them more than you, then lady, you have one huge boy-shaped problem.

A real man with goals will inspire you to be a better person. It goes both ways of course. But boys, they don't even know what they want from life.

25. He acts like a douche until you break up with him

Only boys and cowards (or both) are too scared to fess up about how they really feel.

So is your boyfriend a boy OR a man? Tweet us @sofeminineUK

Don't Take Sh*t From Him! Things Women Should Never Have To Put Up With In A Relationship

25 Annoying Things Men Do In Bed