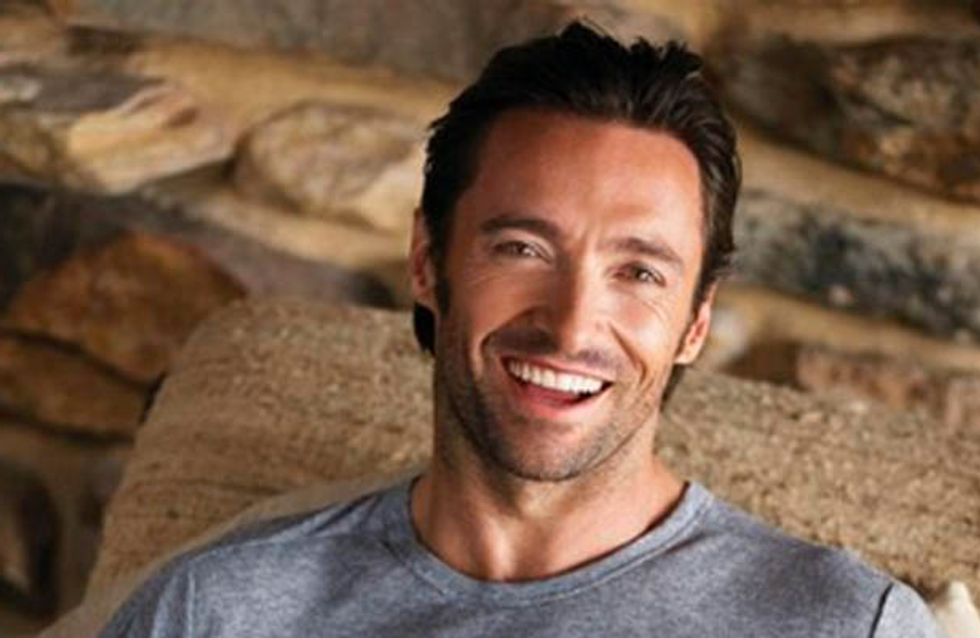 We have come to the conclusion that Hugh Jackman, of X Men, Wolverine and Les Miserables fame, is literally the best man in the whole world. All evidence points to it, and here are only twenty reasons out of the thousands why we should all set up a Google Alert for Hugh's name, just so we don't miss the next wonderful thing he's going to do next!

1. He has a beautiful singing voice

Hugh Jackman’s portrayal of Jean Valjean in Les Miserables was Oscar nominated, and since he sings the whole way through it, we like to think the nomination is solely due to his heavenly singing voice!

2. He likes to burst out of water with his shirt off

These are his muscles. This is his body. This is REAL life.

3. The boy can dance

He can tap dance. He’s all muscly and handsome and there he is, tap dancing and clapping away. As one of the Instagram top comments says, he can tap us any day!

Whilst overly hairy men usually gross us out (wax strips? Hello?), Hugh’s layer of fluff is manly, hot and grrrr we just wanna get our hands in it! The guy also plays Wolverine, therefore he HAS to be hairy. It’s to be encouraged!

5. He and his wife always look so happy

Hugh and his wifey Deborra-Lee Furness have been married eighteen years and always look delighted to be in each other’s company. They might be our favourite ever celebrity couple. Ever.

6. His children are just as happy!

Since Deborah suffered two miscarriages, she and Hugh adopted little Oscar and Ava, and this family always looks like they're having the best time! We love them.

7. He can laugh at himself

Hugh Jackman has no problem debasing himself for the amusement of others, which we enjoy.

There is something about that accent that makes us think of summer and BBQs. And hot men grilling food on BBQs. Fortunately it makes Hugh that more attractive! He even starred as an Australian in a film called Australia, so you know he's legit.

9. He once dressed like this and we couldn’t be happier

It was for the film Kate and Leopold. Bonus point: he's riding a horse.

The puppy's name is Dali and Hugh wanted to make sure he wasn't cold by putting his coat on. So thoughtful.

11. He did some rubbish jobs before he became famous

Hugh used to take on any old job back in the ‘almost-famous’ days, one of which was narrating the fireworks at New Year in Australia. How can he be attractive and funny?! HOW?!

12. He hosted the Oscars and it was amazing

If you know Hugh like we do, you’d know that he is well into his musicals, and dedicated his opening monologue at the Oscars to a vibrant musical number. We still don’t know where it sat in terms of cool and cringey…

14. He rocks the long locks

Hugh looks good with any hairstyle, but this one especially stood out to us!

15. He likes Pharrell as much as we do

Clap along if you feel like Hugh Jackman is a truth!

Like every sensible man, Hugh Jackman takes heed of his wife’s advice to get a strange mark on his nose checked out, and it turned out it was a basil cell carcinoma that he quickly had removed. The moral of this? ALWAYS LISTEN TO YOUR WIFE SHE IS ALWAYS RIGHT.

There are some serious candles on this cake. Wild birthday times!

18. He appreciates the fandom

Posting from his Instagram, Hugh loves seeing what the fans have been up to, whether they’ve made his face feature on coffee cups or had elaborate Wolverine tattoos done…

If we went out with Hugh, we could meet and befriend them! But most importantly we’d be going out with Hugh. Sigh.

20. Most importantly: HE IS BUFF

To sum up: Hugh Jackman is unbelievably attractive. Inside AND out. Right? Right.

Is your love for Hugh Jackman irrevocable and for infinity? Tweet us @sofeminineUK